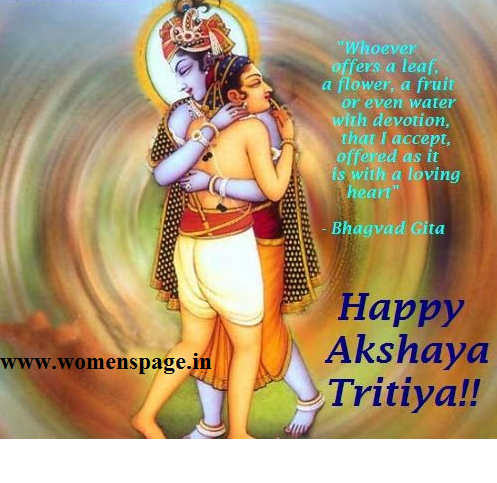 Akshaya Tritiya also referred to as Akha Teej is considered the most auspicious days of all by Hindus in India. The pious day of Akshay Trithiya falls on the third day (Tithi) of Bright phase of moon (Shukla Paksha) of Hindu month of Vaishakha. The name Akshay Trithiya describes the special planetary positions of Moon, Sun and Jupiter, as on this day all three unanimously come under Mrigshira Nakshatra. Moon and Sun both glow at their brightest level, indicating the auspiciousness of the day.

The day of Akshay Trithiya is considered highly auspicious by Hindus as the day is thought to bring good fortune and prosperity for every one. The literal meaning of Akshay in Sanskrit means imperishable or “never diminishing” and thus the day is believed to be the best time for beginning new ventures or investing money in precious metals and land. Every year, the sacred day sparks rays of new hope in Hindus from all over India and thus the day is celebrated by people irrespective of caste, creed and cultural diversities.


Lord Krishna, an avatar of Vishnu, the God who carries out the work of sustaining the universe, figures prominently in most stories about the origin of Akshaya Tritiya. Of these, the most famous one is, perhaps, that of Kuchela, also known as Sudama, and Krishna.

Kuchela was a poor Brahmin and a childhood friend of Krishna. A time came when he was in dire straits and could not earn enough for his family. So he decided to go and meet his former school mate who was now king of Dwaraka and ask for some financial help to tide him over. Before setting out on his journey, he packed a handful of poha or aval (beaten rice) as a humble gift for his friend, the king.

When he reached the palace, Kuchela was mesmerized by all the wondrous things that he saw and felt ashamed to offer his gift that he felt was definitely unfit for a king. Krishna was very happy to see his childhood friend. He welcomed Kuchela with open arms and treated him like a god, following the age-old Indian dictum that ‘The guest is god’ (Atithi Devo Bhava). He happened to see the packet of beaten rice that Kuchela was hiding and playfully grabbed it, opened it and began to eat the poha with obvious enjoyment. When he saw this, Kuchela was so overcome with emotion that he forgot why he came to see Krishna.

After spending some joyous days with Krishna at the palace, Kuchela began his long walk back home. During the journey, he suddenly remembered that he had failed in his mission and walked home with a heavy heart wondering how to console his waiting wife and children. On reaching his village, Kuchela found a palace where his hut stood, and inside the palace, his wife and children clothed in the finest of clothes. Food fit for royalty was also laid out on the dining table.

Kuchela realized that this was a miracle performed by the divine Krishna, who had many fantastic powers that he wielded to help each and every person who approached him with a problem of any sort. From that day on, the day that Kuchela met Sri Krishna was observed as Akshaya Tritiya (Akha Teej) day. 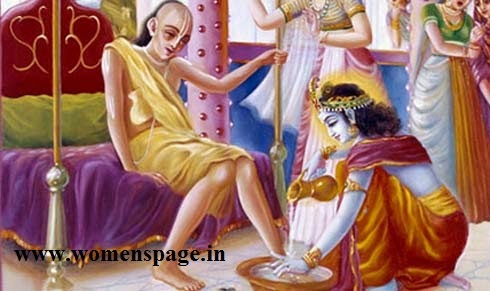 Yet another legend associated with Akshaya Tritiya is set in the epic of the Mahabharata. Mahabharata is the story of the epic battle between the Pandava princes, who stand for Good and their cousins, the Kauravas, who stand for Evil. The five princes were robbed of their royal inheritance which they gambled and lost in an unfair game of something very like the modern chess.

When the Pandava princes were exiled into the forest along with their young bride and their aging mother, they could not find enough food to feed themselves, as they were unaccustomed to living off the forest. Lord Krishna, taking pity on their sorry plight, presented Draupadi, who was wife to all the Pandavas, with a magical bowl that would always stay full.
This magical bowl carrying an unlimited quantity of food was known as the Akshaya Patram and it is believed that Krishna presented this gift on a Tritiya day. Like the food in the Akshaya Patram, it is believed that all investments made on this day will have an unlimited increase in value.
It was also on an Akshaya Tritiya day that the Pandava princes unearthed weapons that would guarantee their victory in battle with the Kauravas.
The day is also the birthday or appearance day of Lord Parashuram, an incarnation of Lord Vishnu born as a Brahmin warrior-saint who wielded the parasu, an axe-like weapon.

According to the Puranas, the day also marks the beginning to Treta Yuga. On this day, Veda Vyasa began the composition of the Mahabharata.

Kubera, also considered the Lord of wealth is believed to have been blessed with riches and prosperity on this day, thus strengthening the significance of this day.

Another legend which people relate to Akshaya Tritiya is about the Kanakadhaara Stotram. Once Adi Shankaracharya went to a house for alms. There was a poor lady all alone in the house and with no food in the house to be given to him in alms. She frantically searched the house and found a Gooseberry(Amla/Nellika). and she gave it to him. Adi Shankaracharya was very pleased at the lady's willingness to donate the only piece of food she had. Adi Shankaracharya immediately recited the KanakaDhara Stotram and invoked Devi Mahalakshmi. Devi Mahalakshmi was pleased and she showered the lady’s house with Golden Gooseberries. This incident is supposed to have happened on Akshaya Tritiya Day.

In several parts of India, farmers wake up early, go the fields to till the land and offer a pooja on this day.

It is said that an act of goodwill on this day will bring happiness and peace to the family. Akshaya Tritiya is a significant day to indulge in some charity.

But judging by the sea of humanity that throngs all the jewellery shops on Akshaya Tritiya these days, it appears that the day is all about buying gold only! It is Yellow Fever all the way.