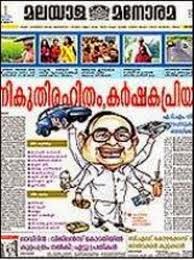 
Malayala Manorama  is a daily morning newspaper, in Malayalam language, published from Kottayam in the state of Kerala, India by Malayala Manorama Company Limited. It was first published as a weekly on 14 March 1890, and currently has a readership of over 20 million (with a circulation base of over 2.1 million copies).The Malayalam title "manorama" roughly translates to "entertainer". According to World Association of Newspapers, as of 2011, it holds a position as top 11th most circulating newspaper in the world. According to the Audit Bureau of Circulations (ABC) 2013 figures, it is the fourth largest circulating newspapers in India (behind Dainik Bhaskar, The Times of India and Dainik Jagran) and largest circulating newspaper in Kerala.

Malayala Manorama, much like most of other Indian newspapers started in the same period, is owned by single family, known as the Kandathils. The Kandathils are a Syrian Christian family of high status and with a long commercial tradition. Malayala Manorama Company was incorporated by Kandathil Varghese Mappillai at Kottayam on 14 March 1888. The company started with one hundred shares of Rs 100 each. The investors paid in four equal instalments. With the first instalment, the company brought a Hopkinson and Cope press, made in London. A local craftsman, Konthi Achari, was hired to make Malayalam types for the imported press.

Mappillai had worked for a year as editor of Kerala Mitram, a Malayalam newspaper run by Gujarati businessman Devji Bhimji, in Cochin. The name Malayala Manorama was "almost" chosen by poets Kerala Varma, Vilvavattathu Raghavan Nambiar and Valiakoyhi Thampuran. The maharajah of Travancore Moolam Thirunal approved the logo of the newspaper which was a slight modification of the Travancore Coat of Arms.

For several years since the rebirth in 1947, it was a shaky existence for the debt-ridden Malayala Manorama, with the threat of a fall in circulation, rivalry from four other newspapers with higher circulation in Kottayam itself, and other difficulties. On KC Mammen Mappilla's death, his son KM Cheriyan took over as the Editor-in-Chief in 1954. "Malayala Manorama was then hardly a modern newspaper. It had only a handful of employees, a single edition in the small, central Kerala town of Kottayam, an outdated printing press, rudimentary arrangements for news gathering, communication, marketing and distribution, and a circulation of 28,666 copies", The Hindu later wrote about the Manorama of the 1950s. However by the late 1950s, Manorama steadily increased circulation and overtook Mathrubhumi in circulation, the dominant Malayalam daily at the time. However, like Mathrubhumi, it only enjoyed wide success in its own small town [Kottayam] and its neighbourhoods