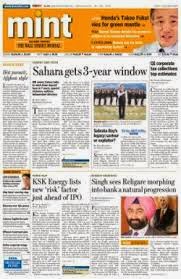 
Mint is India's second largest business newspaper published by HT Media Ltd, the Delhi-based media group which also publishes the Hindustan Times. It mostly targets readers who are business executives and policy makers. It is India's first newspaper to be published in the Berliner format. Mint exclusively carries "WSJ" branded editorial content in its pages by virtue of the content sharing partnership between HT Media and Newscorp, which owns the Journal. The current Editor of the newspaper is Sukumar Ranganathan.
Mint was launched in collaboration with The Wall Street Journal on 1 February 2007, with the Journal's former deputy managing editor, Raju Narisetti as its founding editor. Around eight months before the first edition was published, Narisetti went about hiring and assembling staffers for Mint. Several trial runs of the newspaper, with varying formats and names on its masthead were reportedly tried out before settling with the current ones. The launch team comprised some of India's leading business journalists as well as a handful of staffers from the Journal, whom Raju Narisetti had brought on board with the intention of bringing some WSJ style and flavour to Indian journalism. Informed observers saw it as a well calculated attack on the near monopoly of The Economic Times, published by The Times Group, HT Media's rival media conglomerate. Within two years of its launch, Mint was second only to ET and established itself as 'India's fastest growing business daily'.
Saturdays see the distribution of Mint Lounge, the weekend edition, which is more popular than the weekday issues based on increased circulation figures, especially with women readers. Lounge is a magazine-style supplement that focuses on the arts, food, culture, fashion, sport, music, etc. It features columns by Rohit Brijnath, Samar Halarnkar, Shoba Narayan, Mayank Austen Soofi, Aakar Patel and Natasha Badhwar.