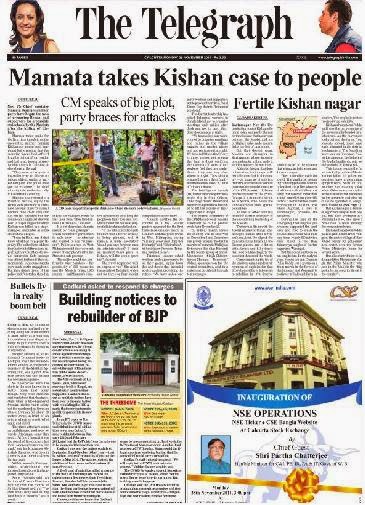 
The Telegraph is an Indian daily newspaper founded and continuously published in Kolkata (Calcutta) since 7 July 1982. It is published by the ABP Group and the newspaper vies with the Times of India for the position of having the widest circulation of any newspaper in Eastern India.

According to the Audit Bureau of Circulations, it has a circulation of 484,971 copies as of 2008.The newspaper is the fourth most-widely read English newspaper in India (after Times of India, Hindustan Times and The Hindu) with a readership of 1,275,000 according to Indian Readership Survey (IRS) 2012. The Telegraph mainly published from eastern India is noted for its extensive coverage of Indian foreign policy and its focused reporting on India's troubled North-East. The Telegraph is also published from Guwahati and Jorhat (for entire northeast), Siliguri (for North Bengal and Sikkim), Patna, Jamshedpur and Ranchi (for Jharkhand), Bhubaneswar (for Odisha).The Telegraph comes with six editions Calcutta edition, South Bengal edition, North Bengal edition, Northeast edition (Guwahati and Jorhat splits), Jharkhand edition (Jamshedpur and Ranchi splits) and Odhisha edition.

The Telegraph was founded on 7 July 1982. The designer director of Sunday Times, London Edwin Taylor designed the newspaper provided a standard in design and editing. In 31 years, it has become the largest circulated English daily in the eastern region published from Calcutta. In 1982, M J Akbar the current editorial Director of India Today used to edit and design the daily newspaper thus it had a major impact on newspaper journalism in India.