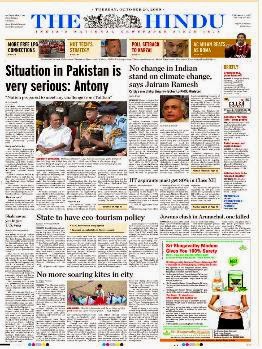 
The Hindu is an English-language Indian daily newspaper. Headquartered at Chennai, The Hindu was published weekly when it was launched in 1878, and started publishing daily in 1889. According to the Indian Readership Survey in 2012, it was the third most widely-read English newspaper in India (after the Times of India and Hindustan Times), with a readership of 2.2 million people. The Hindu has its largest base of circulation in southern India, and is the most widely-read English daily newspaper in Kerala and Tamil Nadu.

According to the Audit Bureau of Circulations, The Hindu had a circulation of 1.46 million copies as of December 2009.The enterprise employed over 1,600 workers and annual turnover reached almost $200 million in 2010. Subscription and advertisement are major sources of income. The Hindu became, in 1995, the first Indian newspaper to offer an online edition.It is printed at 20 locations across eight states Chennai, Coimbatore, Bangalore, Hyderabad, Madurai, Noida, Visakhapatnam, Thiruvananthapuram, Kochi, Vijayawada, Mangaluru, Tiruchirapalli, Kolkata, Hubli, Mohali, Allahabad, Malappuram, Lucknow, Anantpur and Nellore.