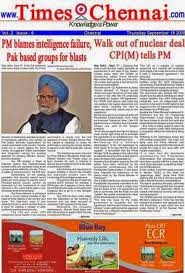 
The Times of India (TOI) is an Indian English-language daily newspaper. In 2008, the newspaper reported that with a circulation of over 3.14 million it had been certified by the Audit Bureau of Circulations (India) as the world's largest selling English-language daily, ranking it as the third largest selling newspaper in any language in the world and the largest selling newspaper outside Japan. According to the Indian Readership Survey (IRS) 2012, the Times of India is the most widely read English newspaper in India with a readership of 7.643 million. This ranks the Times of India as the top English daily in India by readership. It is owned and published by Bennett, Coleman & Co. Ltd. which is owned by the Sahu Jain family.