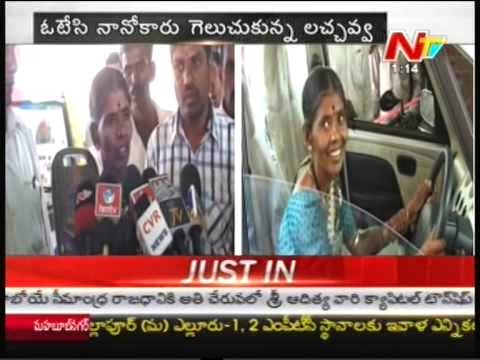 Winners in the elections will have to wait until the results are out on Friday but in Medak district of Telangana region, voters are celebrating like never before.


She probably hadn't seen or even heard of a Nano but a villager has won the car - just because she went and exercised her franchise on April 30 in the general elections in Medak district.

Paruna Lachavva of Chinnakonduru mandal in Siddipet assembly constituency bagged the Nano in a draw picked by Medak district collector and district election officer Smita Sabharwal. In order to boost voter turnout during the election, Smita Sabharwal had organized a "voter panduga" (voters festival). On Thursday, bumper prizes were picked for voters who were eligible for the draw. Villages in which there was 95 per cent polling were eligible for the draw.

Apart from the bumper prizes that were won by the villagers, the district administration also picked draws for villages which recorded 92 per cent polling. In the draw 220 Nokia mobile phones, 410 household articles, 460 ceiling fans, 60 lunch boxes and 20 briefcases were won by voters.

All the prizes will be given away to the winners at a special meeting that will be organized by the Medak district collectorate on May 17 at 10.30am.
Thanks for Visiting womenspage.in