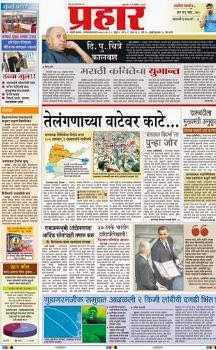 
'Prahaar''  is a Marathi language, newspaper, printed in India with regional editions in Mumbai, Thane, Ratnagiri and Sindhudurg.

Prahaar's editor is Mahesh Mhatre. It was the dream project of Narayan Rane, Industry and Port Minister of Maharashtra. frameless thumbnail On 8 October 2008, Narayan Rane launched Prahaar under the banner of Rane Prakashan Pvt. Ltd. At the launch, Rane said that a newspaper was a powerful weapon of public awareness and revolution and that he wanted to use it for the development of Maharashtra. In the signed editorial carried on the front page of his newspaper, Rane stated, “I am a politician. I had the honor of occupying several political positions over the past 40 years. I had to join the Congress after working for 39 years in the Shiv Sena. I feel it is the play of destiny in my life.”

Prahaar has evolved into an extensive informative read, which cater to a broad possible spectrum of Maharshtrian readership. While retaining its core Marathi readership base, Prahaar has extended to new media frontiers.

Prahaar is the first and only Marathi language newspaper that has been displayed in the world famous gallery of Newseum, the interactive museum of news and journalism based in the United States.

The e-book on personal reminiscences of celebrated personalities, published in the paper, was released by actor Nana Patekar on Prahaar's fifth anniversary.