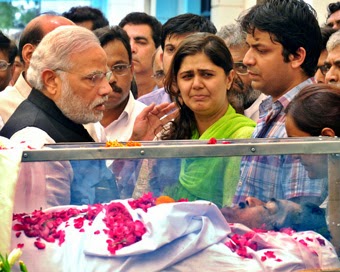 Tens of thousands of mourning supporters and distraught family members on Wednesday bid a tearful farewell to Gopinath Munde, Maharashtra BJP's tallest mass leader and architect of its impressive victory in Lok Sabha elections, who was killed in a car crash in Delhi yesterday.

Roars of "Gopinath Munde amar rahe" and "Munde Saheb parat ya (Munde Sir, come again)" went up as daughter Pankaja lit the funeral pyre standing amidst a sea of humanity at the departed leader's home town in the backward Marathwada region.

Pankaja, BJP MLA from Parli and heir to Munde's political legacy, lit her father's funeral pyre marking a departure from the Hindu tradition of a male member of the family doing the duty and signalled her taking over the leader's political mantle.

Grief, however, gave way to anger as the milling crowd, that had gathered under the blazing sun, became restless to have a closer glimpse of their beloved leader.

Gopinath Munde's sudden death has dealt a harsh blow to the fledgling Narendra Modi government and BJP's plans for Maharashtra assembly polls that are barely four months away.

The early morning crash that killed Munde came at a time when the politician was enjoying renewed relevance in BJP affairs after a lean patch that had seen him even contemplate leaving the party.

Munde's selection for the politically important portfolio of rural development was a careful choice as Modi wanted to give charge of the ministry to a leader with sound grasp of ground realities.

Munde, a backward caste leader from Maharashtra's Marathwada region, knew about impoverishment and rural distress, given his own hands-on experience as a grassroots leader.

If Modi was scouting for a minister who could assess the needs of farmers and rural artisans and ensure that billions of rupees of government funds are well spent, he couldn't have done better than Munde.

Munde's departure will again expose the thin leadership reserves in BJP despite its unprecedented 282 seats in Lok Sabha. It will not be easy for Modi to find a suitable replacement.

A pall of gloom descended on the village of Parli after the news of Gopinath Munde's death spread like wild fire. Munde's body has left the city of Mumbai to reach Parli, where the funeral will take place. Huge number of locals gather at the ground near Vaijnath sugar factory to pay respects to late Gopinath Munde.

The mortal remains of Gopinath Munde was consigned to flames in Parli, witnessed by thousands of people gathered to bid adieu to the leader. The funeral procession of Munde received state honour before his eldest lit the funeral pyre