iOS 8 New Features For Your iPhone and iPad

iOS 8 New Features For Your iPhone and iPad 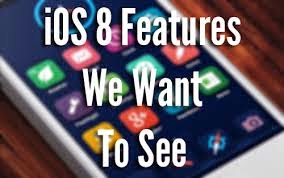 Apple took the wraps off iOS 8 during today’s WWDC keynote.The new Apple iOS 8 presented at WWDC 2014 is a lot more than Healthkit Apple's new vital statistics monitoring system and a few adjustments to the interface introduced last year. Here you will find the complete catalog of new features along with live commentary on all of them.

Healthkit
Apple has created a new API called Healthkit. Developers will be able to link applications to a central database of your personal health data.This will be available not only for apps you can buy in the app store, but also professional medical applications and platforms. So if you get your blood pressure or your sugar blood data from your hospital, your iPhone will receive a secure notification with this data. You will be able to store it privately and even better share this information easily with other doctors and hospitals. Apple listed a lot of institutions that are jumping right in, including the Mayo Clinic.

Camera new features
Apple seems to be beefing up the camera software quite a bit. For users, iOS 8 will add Time Lapse photography, which is pretty cool. But the news may be in the developers side, with a new camera application programming kit that will allow third-party apps to access the camera hardware in depth, with controls that weren't available before. This may indicate that the camera in the next iPhone may be beefed up quite considerably.

Photos
Apple has also included a new Photos app that includes new editing capabilities that can be used with a simple thumb gesture. It seems pretty easy to use, especially their equivalent to Photoshop's Shadows and Highlights, which uses smart image analysis to get pretty great results .The technology seems similar to the iOS version of iPhoto but with a much simpler interface.


Apple is also building a OS X Yosemite version of Photos, fully built around Apple's cloud. This may indicate that they are going to phase out iPhoto.

All photos are now in the Cloud with 5GB of free storage. Other storage plans, Apple says, will start at $1 per month. There's no more distinction between local and cloud. Your local device will act as a cache for what's on the cloud hopefully with lots of security, so nobody can access your nudie pics.

Continuity
Continuity is one of the most exciting things in iOS and OS X. It is a group of technologies that seamlessly integrates both Macs and iOS devices:

Airdrop. Now works between Macs and iOS devices. You can drag and drop a file from your Mac to your iPhone or iPad via a Wi-Fi network, seamlessly.

Handoff
Your iPad and iPhone are always aware of what you are doing on your Mac. So when you are working in a Mail message and you have to leave your workstationn, you can pick it where you left it on your iPad or iPhone to continue that message right away. The iOS device will show a small icon on the bottom left corner of the lock screen. Clicking on an icon will open whatever you were working on before.

Text message integration
Now your iPhone can send text messages to your Mac, which is very cool feature. The iPhone would relay your regular text messages sent by non-iOS phones into the iMessage app in your Mac. All your messages, regardless of their origin, will be synchronized everywhere. I wish this worked with other chat services, like Gchat or Facebook, finally providing a centralized, seamless message center.

Call integration
Even cooler than the text messaging is that you can use your iPhone to relay voice calls to your Mac complete with Caller ID and call from your Mac through your iPhone. It's all automatic: The iPhone gets fully integrated and your Mac acts like a speaker and microphone.

Accessing people
You can access people by double tapping on the home button. The most contacted people will pop as a line of icons. Clicking on one face will give you access to all the forms of communication available: Calls, chat, FaceTime or FaceTime Voice.


Enhanced mail
The new mail has a variety of enhancements, but the best is the gesture based message manipulation, a la Mailbox. You can swipe to the left to delete a flag or reply to a message. Swipe a bit harder and you can easily delete the message itself.

Spotlight
Spotlight accessible from the lock screen and everywhere in iOS with a downward swipe works across the entire iPhone to give you results but also now offers you suggestions of things that are not stored in your device. It will give you suggestions on:

Even apps that you haven't downloaded yet related to your search (which maybe can get quite annoying). It's similar to what Google does in Android or Microsoft on Windows Phone. It works in Safari too.
Keyboard enhancements
For the first time, Apple is renewing its keyboard. The new iOS finally supports context-sensitive predictive typing, giving you a list of words that you can use to make your text entry a lot faster.

Apple claims that the new engine learns how you write. It's so sensitive that it knows who you are talking with and adjusts the suggestions accordingly. In the example above you can see more informal suggestions to a friend and more formal ones to a colleague. Apple claims it learns from your behavior.

The prediction of the words is also context sensitive, so if you are talking about a dinner date, it'll give you the adequate words for that environment. It will even interpret questions and give you answers so you only have to click and not type. It seems pretty cool but for some reason I think this is not going to end well for our communication abilities.
iMessages
You can mute particular conversations now, which will be very convenient.Another cool feature is the ability to share your location on a conversation by conversation basis, and for limited times.You can send audio and video messages in iMessages too. Like SnapChat, the messages self-destruct. But unlike SnapChat, you can select not to destroy the messages and they take a long time.

You can listen to audio messages sent via iMessage from the home screen. Just take your phone to your ear to listen, no touch required. The same to reply.

iCloud Drive
Apps will be able to access iCloud Drive to enjoy the same "continuity" as Apple apps. A third-party application like Sketchbook will be able to save changes to documents automatically to your cloud, so now every bit of data from every application would be available across iOS devices and Mac .It works with Windows machines too.

Entreprise features
The new iOS has plenty of features for companies and corporations, Apple says. It supports new tools for device management by IT departments, is ease to share documents through central company clouds, and shows calendar availability when making appointments.
Family Sharing

Now you can share stuff with your family in a very easy way: Family calendar, photos, and locations
You can share all the books, music and movie purchases between all the members of your family, up to six. Of course, you should use the same credit card for this to work. If you are a father, don't worry, your kids will be able to use your credit card to buy the latest game, but you will always get a message asking for permission.

Siri
They have updated Siri to listen constantly. When you plug it into your car, for example, you just can say "Hey Siri" and it will activate automatically—without you touching the home button at all.

Another good addition is the integration of Shazam: Siri will now be able to recognize songs on the spot without opening that horrible app. It will also let you buy a new song from the results screen.

Apple is claiming that their new Metal graphics engine offers ten times the performance of their previous 3D rendering engine, which apparently is really impressive (it certainly looks really impressive.) One of the developers, from Epic, says that they were able to bring a full "console-level" engine to the iPad with full fidelity and full performance, whatever that means.

Extensions
This is, by far, the best feature of iOS: Like in OS X, Apple is now allowing app developers to provide extensions for iOS. Developers will be able to add services that other applications can use. An app will be able to use some other app's photo editing software, for example. Or maybe post to Pinterest using a Pinterest extension.

For the user, this will be transparent: When you install any app their services will become automatically available to all other apps.

You will be able to extend Apple's Safari with other extensions too: Here's an image of how Bing Translate works within Safari.

You can even extend the iOS itself, adding custom keyboards.All these extensions run, according to Apple, with a lot of security layers so the user is always in control and no software can grab any information