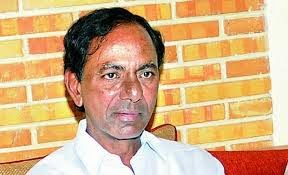 The Telangana Rashtra Samithi (TRS) supremo and chief architect of the separate Telangana agitation, Kalvakuntla Chandrasekhara Rao was on Today sworn in as the first Chief Minister of the newly created State of Telangana on Today.

Koppula Eashwar, tipped to be in the Cabinet did not make it and is now believed to be in consideration for the post of Assembly speaker. Interesting, no woman MLA was included in the cabinet.

Mr. Rao drove to Gun Park near Assembly to pay homage to the martyrs’ of Telangana and then reached the Raj Bhavan to be sworn in.

Earlier, the Governor ESL Narasimhan was administered oath as he had to hold additional charge of newly created 29th state of India.