Live Search on for missing Hyderabad students in Himachal

Live: Search on for missing Hyderabad students in Himachal 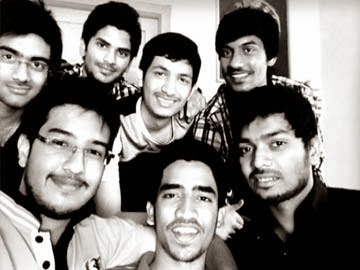 Rescuers are racing against time to look for the engineering students from a Hyderabad college who were washed away in a flash flood in the Beas river in Himachal Pradesh after a hydropower plant released water without warning on Sunday. Bodies of five students have been found.
Here are the live updates:

3.20 pm: Chief Minister Virbhadra Singh calls Manali tragedy 'unfortunate'
2.35 pm: It was not an accident; it was negligence. There was no warning or safety measure there: TRS MP K. Kavitha

Union HRD Minister Smriti Irani on Monday reached the accident spot in Himachal Pradesh's Mandi district where 24 visiting students of a Hyderabad engineering college were washed away in the Beas river.

On landing at the Bhuntar airport near Kullu, Irani assured all possible assistance to the state from the centre in the rescue operation.

"Spoke to Himachal Pradesh Education Minister (Shri) Bali regarding the tragic incident of 24 engineering students feared washed away near Mandi, also contacted the faculty member who was at the accident site. Was assured by tehsildar sadar Mandi that medical aid has been provided," Irani said in a tweet.

She said in another tweet: "I have also spoken to the principal of the college and assured him of cooperation. Our prayers are with the families in this hour of need."

11.35 am: Parents of missing students to be flown to Himachal

Minister of Civil Aviation Ashok Gajapathi Raju will visit Manali to oversee the search for the missing students. The operation is being undertaken in coordination with the Government of Andhra Pradesh. Steps are being taken to facilitate airlifting of parents of the victims to Kullu-Manali.

11 am: Irani assures all help

Union HRD Minister Smriti Irani on Monday assured the state of all possible assistance from the Centre. Irani assured the state Education Ministry, held by Chief Minister Virbhadra Singh,"of all assistance and support required from the Centre", a statement released by the HRD ministry said.
She also spoke to the faculty of the engineering college in Hyderabad who was accompanying the traveling student group. The principal of the college was also assured of all cooperation to tackle the tragedy.

10.52 am: "VMR College is not giving us any information or details. My son Rambabu is missing," said the father of one of the students washed away in the flash flood.

10.46 am: "Extremely sad and heart rending incident. Why no proper warning before release of water," said Shanta Kumar, a BJP MP.

10.45 am: Bodies of five missing students recovered from Beas river

Five students from a Hyderabad college have died and 19 are feared drowned in a flash flood in Beas in Himachal Pradesh after a hydropower plant released water without warning.

"We have recovered five bodies till now. But the volume of water is making operations a bit tough," a Sashastra Seema Bal official, part of the rescue team, said at Pandoh Dam in Mandi district.

Additional Deputy Commissioner Pankaj Rai said one of the bodies was recovered from the dam, whose floodgates were closed after the accident, IANS reported.

The dam is some 15 km downstream from the accident spot.

The accident spot is located some 200 km from state capital Shimla and on the border of Kullu and Mandi districts.

The students, six of them girls, were from V.N.R. Vignana Jyothi Institute of Engineering and Technology in Hyderabad. They went missing after strong currents in the mighty Beas washed them away.

The chances of survival of the students were bleak, officials said.

More than 60 students and faculty members were on an excursion to the picturesque tourist resort of Manali. Some of them were getting themselves photographed on the banks of the river in Thalaut area near Hanogi Mata temple when they were washed away.

The water level suddenly increased due to release of water in the river without warning from a nearby hydropower project.

Singh ordered a probe by Divisional Commissioner Onkar Sharma into the release of water by the project authorities without a warning, said a government spokesperson.

He has ordered the suspension of erring resident engineer of the 126 MW Larji hydropower project being run by the state electricity board. A case of negligence was registered.

A team of the National Disaster Response Fund (NDRF), headed by Commandant Jaideep Singh, is likely to reach the spot by noon, official sources said.

The NDRF team comprises 72 people were dispatched from Delhi.