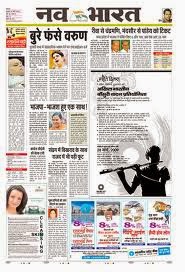 Navbharat Times (NBT) is one of the largest circulated as well as largest read Hindi newspaper of Delhi and Mumbai and Lucknow. It is from the stable of Bennett Coleman & Co. Ltd, which also publishes other dailies including The Times of India, The Economic Times, Maharashtra Times and also magazines such as Filmfare and Femina. NBT is one of the oldest product of the group.

With a circulation of 4.23 lakh odd copies (source: JJ-10, ABC India) in Delhi and a strong readership of 19.7 lakh readers; NBT rules the roost. Hindi being the second language in Mumbai; NBT circulates to 130,000 copies in the Greater Mumbai area (source JD-10, ABC India) and attracts 470,000 NBT readers according to the industry benchmark – the Indian Readership Survey (source: IRS Survey R4, 2010). NBT has been the number one newspaper in the respective cities since inception.
Thanks for Visiting womenspage.in