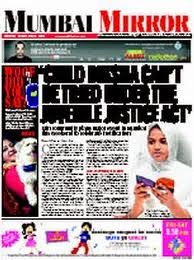 
Mumbai Mirror is the leading compact newspaper in the city of Mumbai, with a daily circulation of approximate 700,000 copies. Its first issue was published on May 30, 2005 by the Times Group, the publishers of The Times of India newspaper.

The newspaper was launched at the Gateway of India by Vilasrao Deshmukh, the Chief Minister of Maharashtra and Abhishek Bachchan on May 29, 2005.