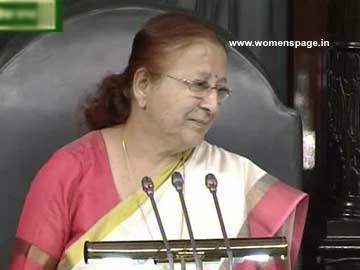 The Lok Sabha elected Sumitra Mahajan, a veteran ally of Prime Minister Narendra Modi, as speaker on Friday, clearing a key hurdle before the government unveils its policy programme next week.

Mahajan, 71, an eight-term member of the house from Modi's Bharatiya Janata Party (BJP), was unanimously elected as speaker of the 545-member Lok Sabha, or House of the People.

Modi won the first outright parliamentary majority in 30 years in last month's election, creating expectations that the new legislature will do a better job after a previous term marked by legislative drift and chaotic debates.

Although the BJP and its allies in the National Democratic Alliance control a big majority, with a combined count of 336 seats, Modi will need to cobble together alliances to pass some measures through the Rajya Sabha.President Pranab Mukherjee is due to present the government's agenda next week, with parliament reconvening in July to consider Finance Minister Arun Jaitley's first budget.

Ms Mahajan is the first BJP leader to be elected the Speaker of the Lok Sabha.Congress leader in the Lok Sabha Mallikarjun Kharge and leaders of other parties too made short speeches congratulating the new Speaker.

Sumitra Mahajan, is the longest serving woman lawmaker in the Lok Sabha. She was elected last month for an eighth consecutive term from Indore in Madhya Pradesh, defeating her Congress rival by a huge margin of 4.66 lakh votes.

Mr Modi said while greeting the Speaker today, "In your name it is inherent you will have friendly and cordial relations with everyone," adding "it is good to walk on the path taken by Mahajans and we have a Mahajan sitting here." Sumitra means "a good friend".

Soon after election results were declared, senior BJP leader LK Advani had reportedly pitched for the Speaker's post. But it was clear soon enough that the party leadership favoured appointing Ms Mahajan.

Speaker of the Lok Sabha Role:

The Speaker of the Lok Sabha is the presiding officer of the Lok Sabha, the lower house of the Parliament of India. His/her role is similar to that of Speakers elsewhere in other countries that use the Westminster system of government.

The speaker is elected in the very first meeting of the Lok Sabha following general elections. Serving for a term of 5 years, he/she is chosen from amongst the members of the Lok Sabha, and is by convention a member of the ruling party or alliance.
Thanks for Visiting womenspage.in