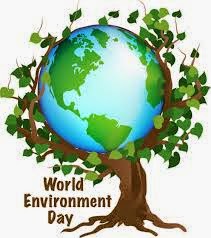 World Environment Day ('WED') is celebrated every year on June 5 to raise global awareness to take positive environmental action to protect nature and the planet Earth. It is run by the United Nations Environment Programme (UNEP).

The UN General Assembly declared 2014 as the International Year of Small Island Developing States (SIDS). World Environment Day (WED) 2014 will be celebrated under the theme of SIDS, with the goal of raising awareness of their unique development challenges and successes regarding a range of environmental problems, including climate change, waste management, unsustainable consumption, degradation of natural resources, and extreme natural disasters. UNEP is also soliciting votes for the 2014 WED slogan through 5 March 2014. The winning slogan will be used to call on the global WED community to take action for islands.

World Environment Day falls in spring in the Northern Hemisphere and fall (rainy season) in the Southern Hemisphere, and midsummer in the Tropical regions.

"Stockholm was without a doubt the landmark event in the growth of international environmentalism", writes John McCormick in the book Reclaiming Paradise. "It was the first occasion on which the political, social and economic problems of the global environment were discussed at an intergovernmental forum with a view to actually taking corrective action."

Community Radio Stations (CRS) in all over Nepal Republic launches the Campaign. All the National Tv & Radio Breakings are replaced by Environment Slogans and Informations. Nepal Government launches various programs in collabration with UNESCO. It also sends the Gurkha Army out of barracks on the road to clean the environment and for afforestation programmes where all the media personalles also gathers giving the live coverage.
Media campaigns

Zee News launched 'My Earth, My Duty’ campaign. This campaign has entered the Limca Book of Records for a novel effort: for planting more than 73 lakh (7,300,000) trees in one single day across 34 cities and 2.5 lakh (250,000) villages on 25 August 2010. NDTV launched "Greenathon" Campaign. This campaign was launched in the year 2008 and served as India’s first ever-nationwide campaign to save the environment.

"Earth Anthem" by poet-diplomat Abhay K was launched in June 2013 on the occasion of the World Environment Day by Kapil Sibal and Shashi Tharoor, Union Ministers of India at a function organized by the Indian Council of Cultural Relations in New Delhi.It is in eight languages including all official languages of the United Nations viz. Arabic, Chinese, English, French, Russian, Spanish.The other two languages are Hindi and Nepali.
What do people do?

World Environment Day is celebrated in many ways in countries such as Kenya, New Zealand, Poland, Spain and the United States. Activities include street rallies and parades, as well as concerts, tree planting, and clean-up campaigns. In many countries, this annual event is used to enhance political attention and action towards improving the environment. This observance also provides an opportunity to sign or ratify international environmental conventions.
Public life

The UN World Environment Day is not a public holiday, so public life is not affected.
Background

World Environment Day was established by the United Nations General Assembly in 1972 to mark the opening of the Stockholm Conference on the Human Environment. Another resolution, adopted by the General Assembly the same day, led to the creation of UNEP. It is hosted every year by a different city and commemorated with an international exposition through the week of June 5.
Symbols

The main colors featured in many promotions for this event are natural colors depicting nature, the earth and its natural resources. These colors are often softer shades of green, brown and blue. Images of natural the earth's features, such as snowy mountains, clean beaches, unpolluted rivers, and photos of natural flora and fauna, including fern leaves, are used to promote campaigns supporting the day.
World Environment DayThemes
2014
The 2014 theme for World Environment Day will focus on 'Small Islands and Climate Change', the official slogan for the year 2014 is 'Raise Your Voice Not The Sea Level.2013

The host for World Environment Day 2008 was New Zealand, with the main international celebrations scheduled for Wellington. The slogan for 2008 was "CO2, Kick the Habit! Towards a Low Carbon Economy." New Zealand was one of the first countries to pledge to achieve carbon neutrality, and will also focus on forest management as a tool for reducing greenhouse gases. Activities based around the event have been planned in the Wellington region between 28 May and 13 June.

The Chicago Botanic Garden served as the North American host for World Environment Day on 5 June 2008. The daylong celebration featured activities for everyone in the family along with presentations by local and national organizations in the areas of food, shelter, energy, education, transportation, and public awareness.

A relatively new way of making environmental causes popular is through online games.
This trend has gained popularity in recent times.
An online game by an independent publisher was launched for WED 2008 with this year's theme "CO2, Kick the Habit! Towards a Low Carbon Economy." the game was called Carbon chomper and can be played for free at this link. Similar envionmental issue related and conservation themed games can be found at cleanuptheworld.org and gamesforchange.org
2007

The topic for World Environment Day for 2007 was "Melting Ice – a Hot Topic?" During International Polar Year, WED 2007 focused on the effects that climate change is having on polar ecosystems and communities, on other ice- and snow-covered areas of the world, and the resulting global impacts.

The main international celebrations of the WED 2007 were held in the city of Tromso, Norway, a city north of the Arctic Circle self-styled as "The Gateway to the Arctic".
The UNEP statement on WED 2007 states:

The day's agenda is to give a human face to environmental issues; empower people to become active agents of sustainable and equitable development; promote an understanding that communities are pivotal to changing attitudes towards environmental issues; and advocate partnership, which will ensure all nations and peoples enjoy a safer and more prosperous future. World Environment Day is a people's event with colourful activities such as street rallies, bicycle parades, green concerts, essays and poster competitions in schools, tree planting, as well as recycling and clean-up campaigns.2006
The topic for WED 2006 was Deserts and Desertification and the slogan was "Don't desert drylands".
The slogan emphasised the importance of protecting drylands, which cover more than 40% of the planet's surface. This ecosystem is home to one-third of the world's people who are more vulnerable members of society. The main international celebrations of the World Environment Day 2006 were held in Algeria.
2005

The theme for the 2005 World Environment Day was "Green Cities" and the slogan was "Plan for the Planet!". Today, the majority of the world's people live in cities. Recognizing this historic moment, Mayor Gavin Newsom has invited Mayors from around the globe to San Francisco for United Nations World Environment Day to forge a collective path towards a sustainable urban future. Mayors are emerging as the most powerful and flexible agents of change. They are able to respond quickly to environmental issues and are uniquely accountable to their citizens. Their enormous purchasing power is shaping markets and making environmental sustainability a manufacturing consideration. They are tackling the globe's most challenging environmental issues and their visionary solutions provide inspiration and serve as models to all sectors of society.