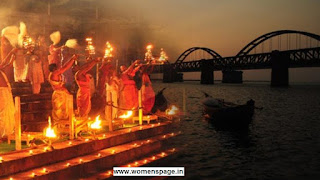 Pushkaram is an Indian festival dedicated to worshiping of rivers. It is also known as Pushkaralu (in Telugu), Pushkara or Pushkar.

It is celebrated at shrines along the banks of 12 major sacred rivers in India, in the form of ancestor worship, spiritual discourses, devotional music and cultural programmes. The celebration happens annually, once in 12 years along each river. Each river is associated with a zodiac sign, and the river for each year's festival is based on which sign Jupiter is in at the time. Due to regional variations, some of the zodiac signs are associated with multiple rivers. Godavari Pushkaralu 2015: StartDate:14th July 2015 End Date: 25th July 2015 No of days Celebrated : 12 Next Pushkaram in 2027 and Maha Pushkaram in 2159

According to a legend mentioned in astrology treatises such as Jataka Parijata (1426), a Brahmin was granted a boon from Shiva after severe penance. The boon was that he would be able to live in water and purify the holy rivers. The Brahmin came to be known as Pushkara ("the one who nourishes"). On a request from Bṛhaspati (Jupiter), he decided to enter one of the 12 sacred rivers when Bṛhaspati traveled from one zoadic sign to another.

Each river is associated with a zodiac sign, and the river for each year's festival is based on which zodiac sign the planet Jupiter (Bṛhaspati) is in at that time.

Let us know some scientific facts.

The Sun-spot cycle which enhances the Earth’s magnetic field during a certain time (correlates with this Pushkaram time) magnetizes the river water and enhances the healing power through the water.

Such healing power will be equal to the power acquired through meditation. Hence Snana (bath), Japa (chanting), Archana (perform puja), Dana (charity) and Dhyana (meditation) are all done at such times, to enhance the power and purity of mind, body, and soul.

The magnetic power acquired and stored in water at the time of Pushkaralu will be high during the early morning before sunrise and in the noon at 12 pm.So, Pushkaralu is considered as the sacred period to take a holy dip in the river waters to purify the body and the soul. Pushkaralu is different from Kumbhamela which is held for every four years, only for a few major rivers of India.

The Pushkaram tradition is not mentioned in the early Hindu texts; it is part of the Hindu astrological lore. Therefore, the names of 12 rivers may vary depending on the regional traditions. For example, in Maharashtra, Bhima is associated with Scorpio sign, while in Tamil Nadu, Tamraparni is associated with it. The sacred rivers include 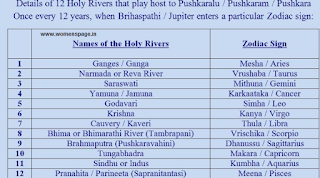 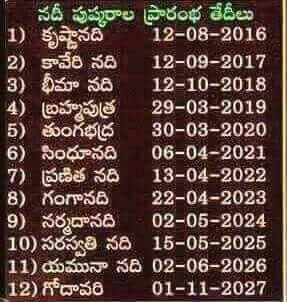