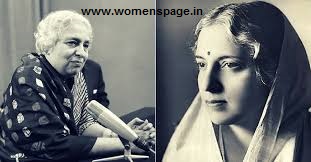 When India was struggling for its independence, there was a woman who contributed to the freedom struggle by becoming the first woman in pre-independent India to hold a cabinet position of local self-government and public health in the year 1937 to 1939.

Vijaya Lakshmi Pandit -an Indian politician, freedom fighter, and a diplomat was born on 18 August 1900, Prayagraj and is better known as Jawaharlal Nehru's younger sister.

Vijaya Lakshmi Pandit was born as Swarup Kumari Nehru on August 18, 1900, in Allahabad and later became one of the world’s leading women in the 20th century.

Vijaya Lakshmi Pandit was born in Allahabad in what was then the United Provinces later, Uttar Pradesh on August 18, 1900, and was given the name Swarup Kumari ("Beautiful Princess") Nehru. She was the eldest daughter of a distinguished Brahmin lawyer, Motilal Nehru, and eleven years younger than her brother, Jawaharlal. Accustomed to luxury and educated at home and in Switzerland, she was greatly influenced by Mohandas Ghandi and became identified with the struggle for independence. She was imprisoned by the British on three different occasions, in 1932-1933, 1940, and 1942-1943. 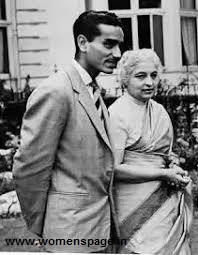 In May 1921 she married Ranjit Sitaram Pandit, a foreign-educated barrister from Kathiawar. At that time she changed her name to Vijaya Lakshmi Pandit. The Pandit's had three daughters, including the novelist Nayantara (Pandit) Sehgal. Her husband died on January 14, 1944.

In 1934 Pandit's long career in politics officially began with her election to the Allahabad Municipal Board. In 1936 she was elected to the Assembly of the United Provinces, and in 1937 became minister of local self-government and public health the first Indian woman ever to become a cabinet minister. Like all Congress party officeholders, she resigned in 1939 to protest against the British government's declaration that India was a participant in World War II. Along with other Congress leaders, she was imprisoned after the Congress' "Quit India" Resolution of August 1942.

In 1921, she was married to Ranjit Pandit (1893-1944), a successful barrister from Kudal, Maharashtra and classical scholar who translated Kalhana's epic history Rajatarangini into English from Sanskrit. He was arrested for his support of Indian independence and died in Lucknow prison in 1944, leaving behind his wife and their three daughters Chandralekha Mehta, Nayantara Sehgal and Rita Dar. She died in the year 1990.

Forced to reorient her life after her husband's death, Pandit traveled in the United States from late 1944 to early 1946, mainly on a lecture tour. Returning to India in January 1946, she resumed her portfolio as minister of local self-government and public health in the United Provinces. In the fall of 1946 she undertook her first official diplomatic mission as leader of the Indian delegation to the United Nations General Assembly. She also led India's delegations to the General Assembly in 1947, 1948, 1952, 1953, and 1963. 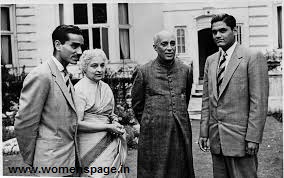 Pandit was elected to India's Constituent Assembly in 1946. Shortly after India's independence in 1947, she joined the foreign service and was appointed India's first ambassador to the Soviet Union. In early 1949 she became ambassador to the United States.

In November 1951 she returned to India to contest successfully for a seat in the Lok Sabha (India's parliament) in the first general elections. In September 1953 she was given the honor of being the first woman and the first Asian to be elected president of the U.N. General Assembly.

For nearly seven years, beginning in December 1954, Pandit served as Indian high commissioner (ambassador) to the United Kingdom, including a tense period in British-Indian relations at the time of the Suez and Hungarian crisis' in 1956. From March 1963 until August 1963 she served as governor of the state of Maharashtra.

Jawaharlal Nehru's death on May 27, 1964 came as a great shock to her. In November, she was elected to the Lok Sabha in a by-election in the Philpur constituency of Uttar Pradesh, which her brother had represented for 17 years. She was re-elected in the fourth general elections in 1967, but resigned the following year for "personal reasons."

Furious at Indira Ghandi's (whose maiden name was Nehru) state-of-emergency suspension of democratic processes from 1975 to 1977, she campaigned against her niece. Her efforts resulted in an electoral defeat for Ghandi.

Pandit had not been politically active for several years when she died in Dehru Dun, India on December 1, 1990. On the occasion of her death, President Ramaswami Venkataraman described Pandit as a "luminous strand in the tapestry of India's freedom struggle. Distinctive in her elegance, courage, and dedication, Mrs. Pandit was an asset to the national movement."

Her daughter Chandralekha was married to Ashok Mehta and has three children. Her second daughter Nayantara Sahgal, who later settled in her mother's house in Dehradun, is a well-known novelist. She was married to Gautam Sahgal and had a daughter, Gita Sahgal. Nayantara married E.N Mangat Rai after Gautam's death. Her third daughter was Rita who was married to Avatar Krishna Dhar and has two sons, including Gopaldhar. She worked in Redcross.

Gita Sahgal, the writer and journalist on issues of feminism, fundamentalism, and racism, director of prize-winning documentary films, and human rights activist, is her granddaughter.

Writings:
Pandit's own writings include So I Became a Minister (1939); Prison Days (1946); a touching essay, "The Family Bond, " in Rafiq Zakaria, ed., A Study of Nehru (1959); many interviews and articles, and innumerable published speeches. Her daughter, Nayantara (Pandit) Sahgal, presented revealing portraits in Prison and Chocolate Cake (1954) and From Fear Set Free (1963). There is no good biography of Pandit, but three books by professed admirers are interesting: Anne Guthrie Madame Ambassador: The Life of Vijaya Lakshmi Pandit (1962); Vera Brittain Envoy Extraordinary (1965); and Robert Hardy Andrews A Lamp for India: The Story of Madame Pandit (1967). She is often referred to in books on the Nehrus and in biographies of her brother, Jawaharlal Nehru.