Heartbreakingly close to success 500 metres or less to be precise Chandrayaan-2 united the entire country for a moment. Despite the lunar lander Vikram’s inability to complete the soft landing, the project will go down in history for more reasons than one. This mission was the first-ever Indian interplanetary project to be spearheaded by a woman, Muthayya Vanitha, who served as the project director. Meanwhile, Ritu Karidhal was appointed the mission director of Chandrayaan-2.

According to UIS (UNESCO Institute for Statistics) data, less than 30 per cent of the world’s researchers are women and though the number is increasing, the contribution of this mission towards encouraging and inspiring young women to literally reach for the stars and follow their dreams will be invaluable. Ahead, we meet the two women who have turned into space sensations overnight. 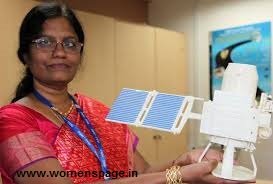 Born to a civil engineer and an electronics and communications engineer in Chennai, Muthayya Vanitha has worked at the India Space Research Organisation (ISRO) for 32 years now. Vanitha originally studied to be a design engineer, but her first job was at ISRO was that of the junior-most engineer. “I joined here as junior most engineer. So I worked in the lab, testing carts, making hardware, designing developing and then reached a managerial position,” she said in an NDTV interview. Later, she was appointed the project director of the telemetry and telecom divisions in the Digital Systems Group at ISRO Satellite Centre.

Before heading the historical mission, Vanitha has also worked as the deputy project director for TTC-baseband systems for Cartosat-1, Oceansat-2 and Megha-Tropiques satellites. However, when given the opportunity, she was reluctant to take up the role, revealed M Annadurai, former director, UR Rao Satellite Centre (URSC) in an interview with IANS. He further added, “I had to convince her and her husband. The task involved at least 18 hours of work daily and there was also the pressure of interacting with the top management on a daily basis as it was a prestigious mission.” She was also part of the team that worked on Mangalyaan, the successful mission to Mars in November 2013.

She was awarded the Best Woman Scientist Award of the Astronomical Society of India in 2006 for her work, and was also featured in the international scientific journal, Nature, in the list of scientists to watch out for in 2019.

She is the mission director of Chandrayaan-2. Before this, she was also appointed as operations director of Mars Orbiter Mission. It was India’s first interplanetary mission.

Ritu Karidhal is fondly regarded as the "Rocket Woman" of India, as she was the deputy operations director for Mangalyaan in 2013-2014.

She's been there and done that, and now holds the mantle of Chandrayaan 2's mission director. She is working closely with Muthayya Vanitha throughout the Chandrayaan 2 mission, taking a prominent role once the spacecraft takes off from earth.It was her responsibility to design Chandrayaan 2's onward autonomy system -- which gives the spacecraft the ability to navigate its trajectory and respond to satellite with a relative degree of independence..

• Her job was to conceptualize and execute the craft's onward autonomy system, which operated the satellite’s functions independently in space and responded appropriately to malfunctions.
• Ritu Karidhal holds a master’s degree in the field of Aerospace Engineering from IISc.
• She has been working with ISRO since 1997. She has received ISRO Young Scientist Award from former president APJ Abdul Kalam in 2007.

ISRO is planning to send one woman astronaut, along with two others, to space under Gaganyaan Mission. VR Lalithambika, as head of the human space programme office, is helping in mission coordination and working with Human Space Flight Centre, the nodal centre for Gaganyaan mission led by its director S Unnikrishnan Nair.

Key scientists and engineers involved in the development of Chandrayaan-2 include:

Vikram may have failed to land on the moon, but the sheer magnitude and daring of the Chandrayaan 2 project, which lost contact only 2.1 kilometres short of its target, is testament to the brilliance and determination of the 16,500 men and women behind India's most complex and ambitious space mission yet.

ISRO says that the Chandrayaan 2 mission was 90-95 percent successful
The primary mission of Chandrayaan-2 was to demonstrate the soft landing of the ‘Vikram’ lander on the South Pole of the Moon, operate the robotic rover Pragyan on the lunar surface, and get exciting images and data.

On September 7, during the last minutes of descent, the communication link snapped with Vikram when it was about 2.1 kms from the surface of the moon. After three days, the ISRO confirmed the sighting of Vikram through images beamed by the Orbiter.
ISRO Chief K Sivan said that the lander was in a tilted position and that it was not broken. Keeping alive hopes, he said that efforts are being made to restore link with the lander. The window of opportunity is said to be 14 days, which is one Lunar Day, and ends on September 21.

While it is a clear case of ‘so close, yet so far’ for the Indian space scientists, the ISRO claims that the mission was 90-95 percent successful, and this was also backed byMadhavan Nair, the former Chairman of the Indian space agency, who led Chandrayaan-1.

Now, let’s see the main components of the Chandrayaan-2 Mission. They are the Launch phase, the Orbiter phase and the Lander-Rover phase.

After initial hiccups with the launch, the ISRO achieved success when the GSLV MK-3 (Geosynchronous Satellite Launch Vehicle) propelled the payload into the destined orbit smoothly on July 22.

Next, it managed a series of neatly executed manoeuvres, all of which went smoothly, and the Orbiter reached the Moon’s orbit on August 20 as planned.

The third and crucial phase of the Soft Landing on the Moon turned into a hard landing.

Many achievements:
The space agency’s first moon mission, the Chandrayaan-1, was launched on October 22, 2008. The mission had two main components, the launch and the deployment of the Orbiter.

It used the PSLV (Polar Satellite Launch Vehicle) rocket, which had a record of successive launches.

Chandrayaan-1 functioned for 312 days, till August 2009. A major find of this mission was the discovery of traces of water molecules on the lunar surface.
In the decade leading up to the second moon mission, ISRO has seen many successes, like that of Mangalyan (Mars Orbiter Mission), the launch of a record of 103 satellites at one go using one PSLV launcher, the experimental reusable launch and other technological developments.

The big challenge was the GSLV, which had some mixed successes. The GSLV is crucial for India’s long-term engagement with outer space studies, and the launch of heavier satellites, for which the commercial market is huge.

Chandrayaan-2, is predominantly an ISRO venture. There is a presence of NASA in the mission, with the American space agency putting a Retroreflector, a laser-guided equipment which is part of the 14 payload experiments that the ISRO has contemplated.

Bouncing back
In this background, though the second shot at the Moon took a decade, the ISRO was well prepared.

Confidence was so high that for the launch on July 15, President Ramnath Kovind was invited. However, at the last hour of countdown, a glitch was observed and the mission was postponed. To ISRO’s credit, it showed boldness in postponing despite the President’s presence.

Moreover, it bounced back quickly to plug the leak issue and give a fresh date for July 22, exactly a week after.

The performance of the GSLV MK-3 was remarkable and it boosts India’s launch capabilities and interplanetary missions in future.

Given that the mission was highly complex and unique, with several key technologies involved and studying the entire Moon, the ISRO has done a commendable job in achieving success in two of the three phases, while almost succeeding in the final phase also.

Whether it is 95 per cent or two of the three phases of success, the organisation will surely go back to the drawing board and fix the issues. Its record, starting from the Satellite Launch Vehicle in 1979 to GSLV, has been commendable in bouncing back from failures by learning from them, and achieving mission success at highly competitive costs and improved performances.

Already, the Chandrayaan-2 Mission has achieved efficiencies in each phase, which has become beneficial by itself. The best example of this is the enhanced life of the Orbiter, which will last nearly 7 years, compared to the expected one year.

The ISRO’s next Chandrayaan Mission is at least five years away and it will be a joint venture with Japan says the Space Agency.

A truly global playground
The Indian mission to land on the South Pole has revived the interest in the Moon.

However, the capability to land on the Moon and send humans were demonstrated nearly 50 years ago. In the space race between the US and the erstwhile Soviet Union, the US stole a march with its Apollo 11 Mission, as part of which Neil Armstrong and Buzz Aldrin landed on the Moon on July 20, 1969.

The NASA driven Apollo Project from 1961- 1972 also saw 5 missions after Apollo 11 and a total of dozen men walking on the Moon. There were several failures too starting with a fire mishap in Apollo 1.

The Russians also had comparatively successful Lunar expeditions starting with the first landing by the spacecraft Luna 2 in September 1959.

The Chinese broke new ground by descending on the far side of the Moon on January 3, 2019 with the Chang 4 Spacecraft.

Israel suffered a failure in April 2019, when the spacecraft Bereshaft crashlanded.
ISRO Chandrayaan-2