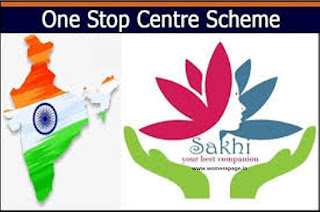 Popularly known as 'Sakhi,' it was implemented on 1st April 2015 with the 'Nirbhaya' fund.Till date, around 234 OSCs have been established across the country to provide integrated support and assistance under one roof to women affected by violence, both in private and public spaces in a phased manner.The One Stop Centres are established at various locations in India for providing shelter, police desk, legal, medical and counselling services to victims of violence under one roof integrated with a 24-hour Helpline.


The toll-free helpline number is 181.
About the scheme:
Popularly known as Sakhi, Ministry of Women and Child Development (MWCD) has formulated this Centrally Sponsored Scheme.

It is a sub – scheme of Umbrella Scheme for National Mission for Empowerment of women including Indira Gandhi Mattritav Sahyaog Yojana.

Under the scheme, One Stop Centres are being established across the country to provide integrated support and assistance under one roof to women affected by violence, both in private and public spaces in phased manner.

Target group: The OSC will support all women including girls below 18 years of age affected by violence, irrespective of caste, class, religion, region, sexual orientation or marital status.

These centres can be contacted for:

The Scheme will be funded through Nirbhaya Fund. The Central Government will provide 100% financial assistance to the State Government /UT Administrations under the Scheme.

Need for protection:
Gender Based Violence (GBV) is a global health, human rights and development issue that transcends geography, class, culture, age, race and religion to affect every community and country in every corner of the world.

The Article 1 of UN Declaration on the Elimination of Violence 1993 provides a definition of gender – based abuse, calling it “any act of gender – based violence that results in, or is likely to result in, physical, sexual or psychological harm or suffering to women, including threats of such acts, coercion or arbitrary deprivation of liberty, whether occurring in public or in private life”.

How to Use One Stop Centre Scheme:

A woman affected by violence can access OSC in the given manner: