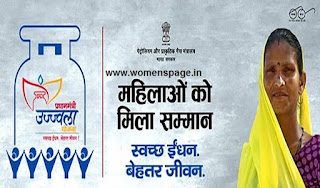 India is home to more than 24 Crore households out of which about 10 Crore households are still deprived of LPG as cooking fuel and have to rely on firewood, coal, dung – cakes etc. as primary source of cooking. The smoke from burning such fuels causes alarming household pollution and adversely affects the health of Women & children causing several respiratory diseases/ disorders. As per a WHO report, smoke inhaled by women from unclean fuel is equivalent to burning 400 cigarettes in an hour. In addition, women and children have to go through the drudgery of collecting firewood.

Pradhan Mantri Ujjwala Yojana (PMUY) aims to safeguard the health of women & children by providing them with a clean cooking fuel – LPG, so that they don’t have to compromise their health in smoky kitchens or wander in unsafe areas collecting firewood.

Pradhan Mantri Ujjwala Yojana was launched by Hon’ble Prime Minister Shri Narendra Modi on May 1st, 2016 in Ballia, Uttar Pradesh. Under this scheme, 5 Cr LPG connections will be provided to BPL families with a support of Rs.1600 per connection in the next 3 years. Ensuring women’s empowerment, especially in rural India, the connections will be issued in the name of women of the households. Rs. 8000 Cr. has been allocated towards the implementation of the scheme. Identification of the BPL families will be done through Socio Economic Caste Census Data.

PMUY is likely to result in an additional employment of around 1 Lakh and provide business opportunity of at least Rs. 10,000 Cr. over the next 3 Years to the Indian Industry. Launch of this scheme will also provide a great boost to the ‘Make in India’ campaign as all the manufacturers of cylinders, gas stoves, regulators, and gas hose are domestic.

The launch of PMUY in Ballia was followed by launch of the scheme in Dahod in Gujarat by Petroleum Minister Shri Dharmendra Pradhan & BJP President Shri Amit Shah. PMUY has also been launched in several districts in UP & Bihar.

HOW TO APPLY:
• A woman of the BPL household, may apply for a new LPG connection (in the prescribed format) to the nearest LPG distributor.
• While submitting the application form, the woman needs to submit detailed address, Jandhan Bank Account and Aadhar number of all members of the household.
• The connection will be issued by the Oil Marketing Companies (OMCs) to the eligible beneficiaries after processing the application.
• In case the consumer opts for EMI, the EMI amount will be adjusted against the subsidy amount due to the consumer on each refill.

Objectives of Pradhan Mantri Ujjwala Yojana:
Ujjwala Yojana is aimed at providing 5 Crore LPG connections in the name of women in BPL (Below Poverty Line) households across the country. The government has set a target of 5 Crore LPG connections to be distributed to the BPL households across the country under the scheme. Some of the objectives of the scheme are

Eligibility for PM Ujjwala Yojana:
The identification of eligible BPL families will be made on the basis of SECC-2011 data. However below is the basic eligibility criteria for the scheme.
Target beneficiaries:
Under the scheme, an adult woman belonging to a poor family not having LPG connection in her household, is an eligible beneficiary under the expanded scheme.

Release of LPG connection under this Scheme shall be in the name of the women belonging to the BPL family.

Under the scheme, five crore LPG connections are to be provided to BPL households. The Scheme provides a financial support of Rs 1600 for each LPG connection to the BPL households, interest free loan to purchase stove and refill by Oil Marketing Companies. The administrative cost of Rs. 1600 per connection, which includes a cylinder, pressure regulator, booklet, safety hose, etc. would be borne by the Government.