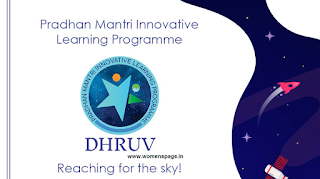 
The Pradhan Mantri Innovative Learning Programme - DHRUV has been started by Ministry of Human Resource Development, Government of India to identify and encourage talented children to enrich their skills and knowledge. In centres of excellence across the country, gifted children will be mentored and nurtured by renowned experts in different areas, so that they can reach their full potential.


The programme is named after a pole star called DHRUV TARA. The main objective of the program is to allow students to realize their complete potential and contribute to the society.

The first batch of DHRUV programme was implemented during October 2019.

60 outstandingly talented students were selected in the first batch of DHRUV programme. To begin with, two areas i.e., Science and Performing Arts were covered. There were 60 students in all, 30 from each area. The 60 students came from across the country. The students have been broadly chosen from classes 9 to 12, from all schools including government and private.

A 14 days programme was organized for these students in which the science and performing arts students were separated into two groups. The science students were further divided into 3 groups of 10 each and also the performing arts students into 3 groups of 10 each. Each group from science stream were required to produce a project under the mentorship of experts from the field of science. Similarly, each group in performing arts were mentored by icons from the field of culture and were required to choreograph a programme. All the six teams were given themes relevant to issues being faced globally like environment change, pollution, terrorism, etc.