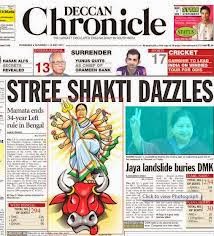 The company started its operations in AP as a partnership concern in 1938. The late Tikkavarapu Chandrashekar Reddy took over the operations in 1976 after the earlier promoters declared bankruptcy. Mr Reddy subsequently handed over the operations to his two sons T Venkattram Reddy and T Vinayak Ravi Reddy, who have been managing its operations since late 1970s.
Since May 2004, it started printing the International Herald Tribune in Hyderabad and sold for Rs 30 per copy.