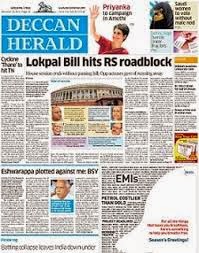 
Deccan Herald is a leading English-language daily newspaper in the Indian state of Karnataka. It is published by the Printers (Mysore) Private Limited and has a number of editions in Bangalore, Hubli, Mysore, Mangalore, Gulbarga and Delhi.

Deccan Herald was started in 1948, with the famous journalist Pothan Joseph as its founding editor. Its sister publications are the Prajavani daily newspaper, the weekly magazine Sudha and the monthly magazine Mayura, all of which are published in Kannada. The head office of the Deccan Herald is on MG Road, Bangalore.

For the first quarter (Q1) of 2011, according to the Indian Readership Survey, Deccan Herald recorded an average daily readership of 423,000 (based on whether the respondent had read the newspaper the previous day). The ABC certified figures for the first half of 2009 put the daily paid circulation (number of bought copies as opposed to number of copies read) at 214,797.

The launch of its Delhi edition in December 2011 marked Deccan Herald's first venture outside of Karnataka, though the paper admits that it will find it very hard to compete in what is India's most competitive newspaper market with 15 newspapers on the market already. Deccan Herald was published from Hyderabad many years ago but stopped owing to dwindling circulation figures. Deccan Herald launched a mobile version of their website in 2013. Deccan Herald also launched their Android app and iPhone app in 2013.