Jairam Ramesh to campaign in Telangana from Thursday

Jairam Ramesh to campaign in Telangana from Thursday

Senior Congress leader and union Minister Jairam Ramesh to campaign in Telangana for three days.
On the first day of his three-day visit, he will address a meeting of party workers at Nirmal town in Adilabad district. He will address similar meetings in Khammam and Nalgonda districts Friday and will also campaign for the party candidates for Lok Sabha and assembly elections. 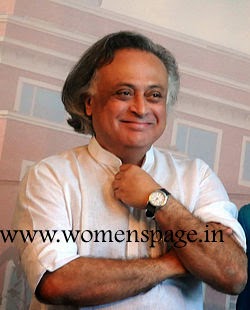 Jairam, who arrived in Hyderabad early Thursday, met Telangana state Congress chief Ponnala Lakshamaiah and other leaders to discuss issues related to the election manifesto. He is expected to release the poll manifesto here Saturday.

He tried to explain how the Congress risked its interests in Seemandhra to fulfill the 60-year-old dream of Telangana people.

The process for filing of nominations in Telangana ended Wednesday. Simultaneous elections to 119 assembly and 17 Lok Sabha seats in the region are scheduled April 30.

Telangana will formally come into being as 29th state June 2. The efforts of the Congress to reap political benefits in Telangana received a setback with the Telangana Rashtra Samithi (TRS) refusing to merge or forge even an alliance with the ruling party.

The Congress has left one Lok Sabha and eight assembly seats for its ally the Communist Party of India (CPI).
Thanks for Visiting womenspage.in