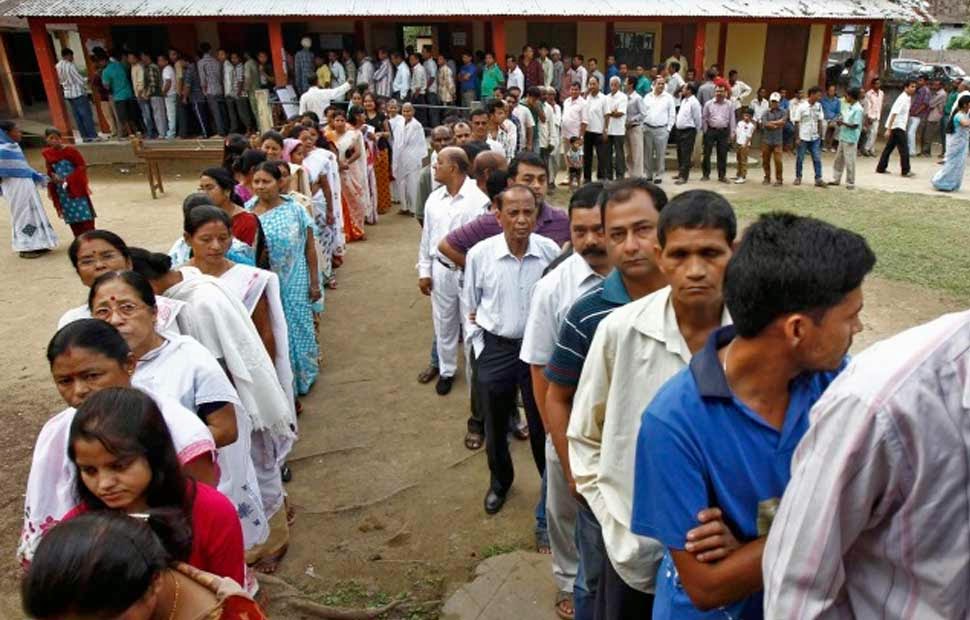 seven states and two Union Territories recorded brisk polling in the 7th phase of the Lok Sabha elections on Wednesday but the most emphatic statement on democracy was made by a young voter who stopped Union minister Chiranjeevi from jumping the queue at a polling booth in Hyderabad.

BJP prime ministerial candidate Narendra Modi also provided some morning drama when he posted a 'selfie' holding a lotus -- the party poll symbol – after casting his vote in Ranip in Ahmedabad. The Twitter post drew howls of protest from the Congress and Aam Aadmi Party (AAP).

Otherwise, it was business as usual with voters forming long queues in the last leg of the April polls to decide the fate of 1,295 candidates including Modi, contesting from Vadodara and Congress president Sonia Gandhi (in Rae Bareli).

Voters in West Bengal – a traditionally high voting state -- once again led the strong show with 45.84% exercising their franchise till 11am in the nine seats where polling is being held.

Voting is taking place in the state in the backdrop of a bitter war of words between the BJP and Trinamool, specially on the Saradha ponzi scam.

In Gujarat, where voting is being held in all 26 seats, over 15% polling was recorded till 10am.

Modi was among the early voters in his home state where the BJP is aiming for a clean sweep.

"I consider myself extremely blessed & fortunate to be a voter in Advaniji's Parliamentary Constituency. Urging all those voting in 89 Lok Sabha seats across India to vote in record numbers today! Hope my young friends show the way in doing so," Modi Tweeted before casting his vote.

Modi's mother Heeraben also cast her vote in Gandhinagar in the morning.

Advani, whose sudden wish to contest from Bhopal had caused some unease in the party, is a candidate for capital Gandhinagar. In the 2009 elections, the BJP had won 17 seats and the Congress nine.

In Bihar, as much as 25.93% polling was recorded in the seven seats going to the polls in the fourth phase of elections in the state.

TV reports said that polling at two booths in Begusarai had to be stopped after it was discovered that "wrong EVMs" had been sent there.

In the Telangana region of Andhra Pradesh and Punjab, 14% of the voters had cast their votes till 9 am when reports last came in.

In Uttar Pradesh, where polling is being held in 14 seats, the polling percentage till 11am was 24.78.

Bahujan Samaj Party (BSP) supremo Mayawati -- trying to emerge as a king-maker or, perhaps, even the 'queen' -- was among the early voters in Lucknow.

However, BJP candidate from Jhansi Uma Bharti could not vote as she was down with high fever and severe throat infection. Bharti is a voter in Lucknow.

Amid tight security arrangements, polling in the 14 constituencies in central UP and Bundlekhand started at 7am.

Even before the polling started at 25,485 polling stations, people had queued up outside to exercise their franchise.

With the presidents of two national parties -- Sonia Gandhi (Congress) and Rajnath Singh (BJP) -- contesting from Rai Bareli and Lucknow respectively, the stakes are high for both the parties.

While Sonia Gandhi is seeking re-election for the third time from her traditional constituency, Rajnath Singh has laid claim on the legacy of BJP stalwart Atal Behari Vajpayee from Lucknow.

In Punjab, where polling is being held in all 13 seats on a single day, Congress and Shiromani Akali Dal (SAD) workers clashed in Moga village leaving 7 persons injured. Details were not available.

The polling percentage till 11am was 25 in the state.

One of the most keenly-watched contests in the state is in Amritsar between BJP leader Arun Jaitley and former Punjab chief minister and Congress candidate Capt Amarinder Singh.

The stakes are very high for the ruling SAD which has four seats and is locked in a bitter contest with Congress.

A big fight erupted between the Abdullahs and Modi in the run-up to voting day over secularism and Article 370 (which grants special status to the state) of the Constitution. The BJP's stated position is it will scrap Article 370 if it comes to power.

Election authorities rescheduled the duration for polling in Srinagar from
7am to 5pm instead of 7am to 6pm.

Official sources said the decision was taken keeping in view the law and order problems that took place in Anantnag Lok Sabha seat which went to polls on April 24.

The fight in Dadra and Nagar Haveli and Daman and Diu is for one seat each. Both seats are with the BJP in the outgoing Lok Sabha.

In the seventh phase, nearly 140 million voters will have their say.