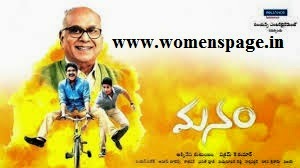 Akkineni multi starrer "Manam" has opened to a fantastic response in India as well as overseas markets.

The film, which hit the screens on 23 May, has been receiving positive reports worldwide. Director Vikram Kumar has won accolades for the script and the execution. The performances of the lead actors have also fetched appreciation from the critics as well as from the audience, with many calling the film as a perfect tribute for the legendary actor Nageswara Rao (ANR), who passed away in January 2014.

Despite clashing with Rajinikanth's "Vikramasimha" ("Kochadaiiyaan" in Tamil), "Manam" is likely to perform well and register good opening on its first day. Positive word of mouth is sure to help the film to do good business in its first weekend.

Prior to the film's release, premiere shows were arranged and the film received grand response during the shows. In the US, "Manam" took a phenomenal start on Thursday (22 May) previews. The family drama minted over ₹53 lakh from 69 screens at the US box office.

"Manam" deals with love that spans 100 years from 1920 to 2020. The film has Shriya Saran and Samantha playing the female leads, whereas the other cast members include MS Narayan, Brahmanandam, Jaya Prakash Reddy, Ali, Tanikella Bharani and Posani Krishna Murali. Interestingly, Nagarjuna-Amala's son Akhil has made his film debut with "Manam" and has done a cameo.

Even before its release, "Manam" was carrying positive pre-release buzz, thanks to the impressive trailer and the songs. Expectations were high for the film as three generation actors from the Akkineni family (ANR, Nagarjuna and Naga Chaitanya) shared the screen space for the first time. The family entertainer lived up to its hype and fetched good response on the first day of its release.

The film, which released in around 800 screens worldwide, is likely to end the first weekend on a grand note by minting good collections. In Andhra Pradesh, "Manam" has reportedly received better response than historic drama "Vikramasimha" and the Akkineni starrer is expected to outperform the Rajinikanth starrer in the state.

In the US, "Manam" is likely to give tough competition to "Vikramasimha" as both the films are carrying good buzz among fans. The multi starrer has taken a fantastic start and is likely to continue its successful run at the US box office. With Monday being a holiday (Memorial Day), "Manam" is all set for a big opening weekend. Positive word of mouth and the long weekend are sure to work in the film's favour and help the Akkineni starrer post good collections.

And Manam Movie is Last Movie For "Akkineni Nageswara Rao".