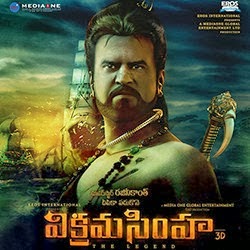 Vikrama Simha Movie Review Story:
‘Vikram Simha’, a Period Drama, is the story of a Son (Rana) who is on a mission to help his Father (Vikram Simha), both played by Rajinikanth, regain his lost glory.

Artists Performances:
Watching a Superstar like Rajinikanth in a Photo Realistic 3D format is going to be a new experience for his massive fan base and the common audience in general. Deepika Padukone is a treat for eyes even if its Animation. The best part is bringing a legendary comedian like Nagesh (Tholi Prema fame) who had passed away back on big screen using the technology. Rest of the cast Sobhana, Nasser, Sarath Kumar, Aadi, Rukhmini and others played their part.

Minus Points:
Animated Rajini: It’s too early to say how the masses will embrace it!
Lacks Technical Finesse
Long Fight Sequences
First Half
Inclusion of 3rd Rajini isn’t convincing

Vikrama Simha Movie Review
Analysis:
Soundarya Rajinikanth deserves appreciation for her good intention to introduce a new technology (3D Motion Capture which was earlier used in Hollywood films like Titanic and Tin Tin) for the film lovers all over Asia.

Not many of the film buffs knew about the that Rajinikanth shot for ‘Vikram Simha’ just for 7 days, Deepika Padukone for 2 days and Rest Of The Cast for another 7 days. Only the expressions and the body language of the artistes have been captured, rest of the work has been done using Technology which is the future! You might hate it or love it, but can’t ignore it!!!

Kudos to Rajinikanth and Soundarya for taking the initiative despite being aware of the huge budget, time constraint and high risk factor involved. Wish Indian Films would compete with Hollywood in terms of technology from now onwards
Thanks for Visiting womenspage.in