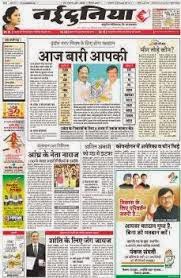 
NaiDunia is a Hindi newspaper owned by NaiDunia Media Ltd. NaiDunia (meaning New World) was born on 5 June 1947 at Indore, just before dawn of Independent India, most aptly timed and named. Established by renowned Freedom Fighters Pandit Krishnakant Vyas and Mr Krishnachandra Mudgal .Mr Krishnakant Vyas was its first Chief Editor also, He was the man who dreamt of bringing a newspaper in Hindi, while the new India is emerging & getting Independence from Britishers. He later on became RAJYA SABHA MP from Madhya Pradesh.Further Mr Babu Labhahcnd Chhajlani, Basantilal Sethia and Narendra Tiwari joined and then treaded its path to popularity in the most turbulent post-independence time.

NaiDunia was first in Indore to install a teleprinter machine of Press Trust on 4 December 1948. NaiDunia pioneered distribution of newspaper in rural areas through Milk Vendors who traveled to Indore every morning and while going back to their villages carried NaiDunia along for distribution.

In 1962 NaiDunia had its own printing facility at Indore. It was period of tough competition. The team at NaiDunia was not of technocrats but at the same time was willing to adopt the best technology available globally. NaiDunia installed India’s first Rotary Offset Machine in 1967. In 1979 highly advanced photo composing set up was commissioned.

In 1987 Laser comp system was adopted and the page composing was finally shifted completely on computers in 1995. In the era of modernization NaiDunia also gave equal stress to quality and versatility of news and presentation.