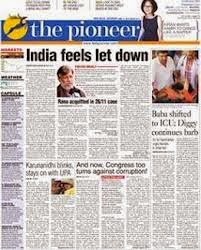 The Pioneer was founded in Allahabad in 1865 by George Allen, an Englishman who had had great success in the tea business in north-east India in the previous decade. It was brought out three times a week from 1865 to 1869 and daily thereafter. In 1866, a supplement, the Pioneer Mail, consisting of "48 quarto-size pages," mostly of advertisements, was added to the publication. In 1872, Alfred Sinnett became the editor of the newspaper. Although he was later to be known for his interest in theosophy, he oversaw the transformation of the newspaper to one of exercising great influence in British India. In 1874, the weekly Pioneer Mail became the Pioneer Mail and India Weekly News and began to also feature short stories and travel writings. Author Rudyard Kipling (1865-1936), in his early 20s, worked at the newspaper office in Allahabad as an assistant editor from November 1887 to March 1889.In July 1933, The Pioneer was sold to a syndicate and moved from Allahabad to Lucknow, Uttar Pradesh, at which time the Pioneer Mail and India Weekly News ceased publication.

The newspaper remained a primarily Lucknow-based paper until 1990, when it was purchased by the Thapar Group, under L. M. Thapar, who made it a national newspaper, published from Delhi, Lucknow, Bhubaneswar, Kochi, Bhopal, Chandigarh, Dehradun and Ranchi. Thapar sold the paper to its editor Chandan Mitra in 1998. At that time it had 484 employees. Mitra announced that he intended to seek other investors in due course rather than to remain the owner. On October 17, 2010, The Pioneer launched its Hindi version of the newspaper from Lucknow  and in May 2012, the paper inaugurated its Raipur bureau, beginning operations of its Chhattisgarh edition.

As of 2013 Chandan Mitra is the Editor-in-Chief of The Pioneer.