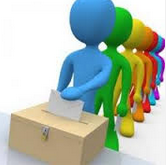 Over 76 per cent polling was recorded to 175 Assembly and 25 Lok Sabha constituencies in Seemandhra on Wednesday.

Braving the scorching heat, voters of Seemandhra turned out in large numbers to exercise the franchise for Lok Sabha and Assembly elections on Wednesday even as sporadic violence and clashes between YSR Congress and TDP-BJP workers were reported from some areas especially Kadapa.

The state's Chief Electoral Officer Bhanwar Lal said the overall polling percentage in 13 districts of Seemandhra where elections were held for 25 Lok Sabha and 175 Assembly constituencies was an impressive 77-78 per cent, as per the tentative figures, with Guntur recording the highest 83 per cent and Visakhapatnam the lowest at 73 per cent. In 2009, Seemandhra had recorded 76 per cent turnout.

Clashes between TDP and YSRCP workers, and some violence by Maoists were reported during the day. The Maoists torched an Electronic Voting Machine (EVM) and a vehicle at Palakagidi agency area (on Andhra-Odisha border) of Visakhapatnam district, forcing authorities to order repolling in one of the polling stations.


Several workers of YSR Congress and TDP were injured in clashes in Kadapa district. Police fired in the air in Guntur and Kadapa districts to disperse the workers.
About Rs 8 crore in unaccounted-for cash was seized during the day, which took the total cash seized so far to Rs 152 crore since the model code of conduct came into force across Andhra Pradesh.
Having been out of power for a decade, today's elections were a do-or-die battle for TDP supremo N Chandrababu Naidu, who has forged an electoral alliance with BJP. His main rival is YSR Congress chief Y S Jagan Mohan Reddy.
Today's elections, the last general election to be held in the undivided Andhra Pradesh, were conducted amid a heavy security.
Elections in Telangana, which is to become the 29th state of the country, were held on April 30.
"In East Godavari district, one person died due to cardiac arrest and not in the clashes; another voter died near a polling station due to sun stroke and heavy consumption of liquor at Niziveedu in Krishna district," Bhanwar Lal said.
Updates:
6.30 pm: The highest turnout of 74 per cent was recorded in Guntur district, while the lowest polling percentage of 67 per cent in Visakhapatam district.

6.15 pm: BJP's prime ministerial candidate Narendra Modi rang up TDP chief N. Chandrababu Naidu to inquire about the polling in Seemandhra. Naidu, a former chief minister, conveyed to Modi that he is confident of the TDP-BJP alliance sweeping the polls.
6.00 pm: Polling recorded 74% till 5 pm today. Polling closed at 6.00 pm in entire Seemandhra.
5:50 pm: Frayed tempers rivalry to the fore at VS Krishna College polling centre. YSRCP-TDP leaders and activists in face-off. A woman, Revathi staged dharna for vote at Sattenapalli in Guntur distreict. she lost her vote due to impersonatio.
5:40 pm: Adding to tension at polling centre at VS Krishna College, a TDP candidate is trying to forcibly enter when a YSRCP candidate is inside.
5:24 pm: Ravi Venkataramana, YSC Ponnuru assembly segment, in Guntur district has been arrested in illicit liquor case by Excise police today, as the stay on his arrest has been ended this evening. 5:20 pm: Several voters leave polling centre during closing hours at V.S. Krishna Govt. College as YSRCP & TDP supporters exchange blows.
5:05 pm:Polling closed in Paderu and Araku segments at 4PM, as they are naxals affected areas. One dead in a clash between TDP and YCP clash at Inagantivaripeta in East Godavari district
5:00 pm: Rival political groups clash at vs Krishna govt. College ad police try to pacify them.
4:40 pm: Police had to subject to mild lathi charge to disperse two groups of YSRCP and TDP. Both parties claimed rigging.
4:25 pm: At 3pm VSP-51.67% Chodavaram-70% Madugula-56% Anakapalle-64.53% Pendurti-70.46% Elamanchili-65% Pykaraopet-63.25% Narsipatnam-65% Araku-55% Paderu-51%
4:15 pm:Voter turnout breakout till 3 pm:
S.kota-58% Bhemili-58% VSP (East)-53% VSP (South)-49.02% VSP (North)-49.30% VSP (West)-49.17% GWK-45.23% Dist total-56.40%
3:50 pm: 63% polling has been recorderd till 3 PM in Seemandhra. CEO Bhanwar lal said that repolling will be held at Palakajeedi in Koyyuru Mandala in Visakha district, where EVMs have been stolen by suspected Maoist. 3:40 pm: Voter turnout in Seemandhra is 52% by 2 pm.
3:30 pm: Pedajalaripeta a critical polling station has recorded a 60 per cent polling turnout. Polls here are peaceful till now and thousands of people have turned up to exercise their franchise. 3:15 pm: Maoist Militia snatch, burn 2 EVM, 1 vehicle at Palakajeedi village in Koyyuru Mandal around 2 pm. None hurt, says SP.
3:00 pm: Narsapuran TDP Lok Sabha candidate has been attacked by YCP activists at Basikapuram in Guntur district. Glass windows of his car have been destroyed.
1:30 pm: Anakapalle cong LS nominee Thota Vijayalakshmi with family votes in Visakha North.

1:25 pm: Kuppam assembly segments, from where TDP president N Chandrababu Naidu is contesting, recorded 42% polling till 12 Noon.
1: 15 pm: TDP president N Chandrababu Naidu condemned attacks on his party workers in Mydukuru and Jamamlanadugu assembly segments. YSC is resorting for attacks with the fear of defeat, he allege.
12:55 pm:YCP and TDP workers clashed at Tadepalligudem in East Godavari district. TDP assembly segment candidate Galla Arunkaumari voted at Chandragiri in Chittoor district
12:40 pm: Three hurt in clash between YSRCP and TDP supporters at Owk of Kurnool district. During first four hours, around 30 per cent votes were polled at 240 polling stations in Visakha East Assembly segment. Check the 11 am voting percent division: At 11am polling: VSP PC-27.64% Chodavaram -39% Madugula 31% Anakapalle-32% Pendurti 34% Elamanchili 33% Pykaraopet 38% Narsipatnam 34.25% Long queues from 6 am at many booths but less voters towards noon. EVMs did not work for 19 to 15 min at few places in payakaraopeta. Polling dull in Anakapalle and in Agency segments. No incidents in agency areas so far.
12:35 pm: Visakha south MLA candidate Dronamraju Srinivas visit sri kanakamahalakshmi temple after voting Confident of victory.
12:30 pm: Jagan's security staff and CRPF personnel jostle with each other at Rajivnagar polling station in Vempalle.
12:15 pm: TDP candidate Ganta Srinivasa Rao after casting vote at MVP colony in Vizag.
12:05 pm: ASP attacked at Devagudi in Kadapa district. Tension prevailed. More police force deployed.
11:55 am: Voter percent break-up till
11 am: Sklm 33% Vzm 3% VSP 28% EG 28% WG 35% KRISHNA 30% Guntur 35% Prakasam 34% NLR 33% KDP 32% KNL 41% ATP 32% CHT 33% Vizag is reported to be very hot. This has hampered polling in several parts of the city.
11:50 am: Attack on ASP Venkatappaiah Naidu at Devagudi in Jammalamadugu mandal, four cops hurt, police vehicles damaged
11:45 am: Police fired two rounds in the air at Rompicherla of Guntur district, as clash witnessed. Situation is in control.
11:35 am: 33% poll percent till 11 am. Vizag records 29%. Kurnool district recorded highest with 43%.
10:20 am: Polling official beatenup by YCP activists at Nadavaluri in Chittoor district. polling stoppe. 10:10 am: Voter turnout percent by constituency

10:20 am: Polling official beatenup by YCP activists at Nadavaluri in Chittoor district. polling stopped. 10:05 am: Voter turnout in Seemandhra is 14.6% 10:00 am: TDP and YCP activists clashed at Kolluru village in Guntur district. TDP and YCP activists clashed at Swarna in Prakasam district. police resorted to lathicharge.
9:50 am: Visakha east TDP Candidate Velagapudi Ramakrishna Babu came on bike to cast his vote at Girijan Bhavan.
9:35 am: TDP member kidnapped at Ramireddypalem in Guntur district; police firing took place.
9:30 am: Voting was delayed by 45 minutes due to a snag in EVMs at booth no. 206 and 183 at VS Krishna government college in Vizag.
9:20 am: Raptadu assembly segment candidate Paritala Sunitha's son Paritala Sriram is house arrest at Venkatapuram village in Ananthapur district, as a precautionary measure.
9.15 am: Rs 2 crore seized in poll raid in Andhra Pradesh on Monday, 4 held.
9:05 am: Pallam Raju from Congress votes in Kakinada; says he would erase the negative sentiments of the people against the bifurcation with development work. However, it is believed that the main fight is between TDP and YSRCP candidates.
9:00 am: Mydukuru TDP candidate Putta Sudhakar Yadav car has been attacked at Vedaruru in Kadapa district by YCP activists. Meanwhile, Jammalamadudu TDP candidate Ramasubba Reddy has been attacked by YCP activists at Goriganuru in Kadapa district. Ramasubba Reddy sitting on the road expressed protest
8:48 am: TDP and YCP activists clashed at Girls' school in Srikakulam.
8:40 am: One of Jagan's family members says that the alliance is not going to involve UPA. Hari Babu (TDP-NDA) votes in Vizag. Being a local, he garners support because people believe that he would be there for them after the elections. Vijayamma, on the other hand does not stay here, believes Hari Babu. Speaking of Jagan's statement that YSRCP is not averse to alliances with BJP after the polls, Babu said that BJP is going to win a clear majority.
8:36 am: Polling stopped at Pallerlamudi of Krishna district, as every vote is going for YSRCP fan symbol.