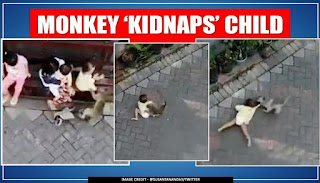 The 15-second video is believed to be from Indonesia. The clip shows a monkey coming in on a perfectly functional mini motor bike. The monkey then gets off the bike near a bench where people were sitting. It jumps on the bench and tries to snatch a toddler.

The toddler falls down and gets out of the grasp of the monkey. However, the monkey comes back, holds the baby's hand, and starts dragging it. Within a few seconds, the monkey grabs the baby’s hair and again starts pulling it.

After covering a little distance, the monkey leaves the baby as it sees people coming towards it. The baby then gets up and walks back to the bench.

This is the most bizarre thing that we have seen. Basketball player Rex Chapman also shared the video with the caption, "Can't remember the last time I saw a monkey ride-up on a motorcycle and try to steal a toddler. It's been ages."