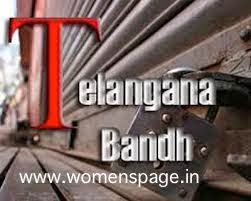 Buses of state-owned Road Transport Corporation (RTC) went off the roads in all 10 districts including Hyderabad.

Shops, hotels and business establishments were also shutdown in many parts of Telangana.

Telangana Rashtra Samithi (TRS) leaders sat in protest outside the RTC depots to stop buses from coming out. Following this, bus services from Hyderabad to various destinations in Telangana and Andhra Pradesh were suspended.

The city services of the RTC in Hyderabad and Secunderabad were also hit, causing inconvenience to commuters.

The Board of Intermediate Education postponed advanced supplementary examinations of 11th and 12th standards scheduled for Thursday.

The Telangana Chief Minister designate called the shutdown to protest an ordinance issued by the Centre to transfer 205 villages of Khammam district of Telangana to adjoining state of Andhra Pradesh.

He termed the ordinance as unconstitutional and said the Centre can't take such a step without consulting the two states, which will formally come into effect on June 2.

A complete shutdown was being observed in Khammam district, especially in Bhadrachalam and Palvancha divisions.

About two lakh people, mostly tribals, who inhibit the villages, are strongly opposing the Centre's move, which is said to be aimed at avoiding an interstate dispute over the project coming up across Godavari river in Andhra Pradesh.

The construction of the project is likely to submerge the villages and to avoid any interstate dispute, they are being merged with Andhra Pradesh.

The Telugu Desam Party (TDP) chief wanted to know why TRS president Rao kept quiet when the previous government announced national status to Polavaram and also declared that the villages would be merged with Andhra Pradesh.

Naidu said he would extend full cooperation to Telangana if Chandrasekhar Rao focused on the development of the new state.