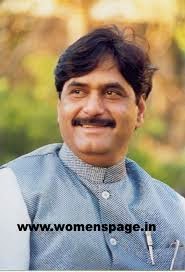 Gopinath Pandurang Munde (12 December 1949 - 3 June 2014) was an Indian politician from Maharashtra. He was a senior leader of the Bharatiya Janata Party (BJP). He was a Member of Legislative Assembly (MLA) for five terms during 1980-1985 and 1990-2009. He was also the Leader of Opposition in Maharashtra Legislative Assembly during 1992-1995. He has held the post of Deputy Chief Minister of Maharashtra in 1995-1999. Munde was elected to Lok Sabha in 2009 and 2014, and served as the Deputy Leader of the BJP in the Lok Sabha. He was appointed as the Union Minister for Rural Development and Panchayati Raj in Narendra Modi's cabinet.


Munde was born in Parali, Maharashtra, on 12 December 1948, to Pandurang Munde and Limbabai Munde in a middle class Vanjari (caste) farmer's family. Munde father Pandurangrao and mother Limbabai, struggled against heavy odds and did not spare any efforts to provide education for Munde.

After the death of Munde father in 1969, his brothers took care of his education. Their struggle against poverty and plight of people in the perennially drought-stricken Beed district left an indelible mark on Munde young mind. This was perhaps the time when Munde made up his mind to do some thing to bring cheer to the suffering people.

Munde primary education was in the village (population then 500, now about 1000) that did not have a school building. The "school" was held under the shade of a tree. Later, the Zilla Parishad constructed a three-room building, but he have pleasant memories of his school days.

Munde was an average student; not very bright, not a dullard either.He was, however, determined to study even when he was not feeling well.

Munde remember having trodden a long stretch of 12 km to appear for the examination, even though his foot was badly swollen.

Munde moved on to tehsil town Parali for the secondary education in the Zilla Parishad School. Arya Samaj Mandir in this little town gave me a broader perspective of humanity and religion.He used to go to the Mandir everyday to read newspapers and books and listen to discourses given by men of wisdom.

After matriculation, Munde joined the college in Ambejogai for graduation in Commerce. He did not have political background in his family, yet he was drawn to the students' movement in the college. He became a kingmaker of sorts, ensuring victory of members of my group though he did not win an election even once during those four memorable years.

His wife Pradnya a graduate,and he said she is a perfect housewife. They met during college days at Ambajogai. Her elder brother Pramod Mahajan (Information and Broadcasting Minister in the Atal Behari Vajpayee government) was Mude senior in the college.

Munde eldest daughter Pankaja has passed out from Ruia College, Mumbai, in 1999. She took up Master's programme in Business Administration.

Pritam, our second daughter. She had an ambition to become a doctor and she is presently studying in a medical college.

Yashashri, the youngest daughter She is studying in Mumbai. Pradnya says all the three kids are Daddy's Daughters who yearn for his love and affection all the time.
Education
Munde attended a government primary school, in Nathra village, Beed district where classes were conducted "under a tree". He later attended the Zilla Parishad high school in Parali. He obtained a BA in commerce from college in Ambejogai. Subsequently, he studied at the ILS College in Pune

Political career
Munde got involved into Politics when he met Pramod Mahajan, a friend and colleague in the college. As a member of the Akhil Bharatiya Vidyarthi Parishad, he took part in the agitation against the state of emergency imposed by the Prime Minister Indira Gandhi. He was incarcerated in the Nashik central jail until the Emergency was lifted.

In 1971, he associated with the campaign of the Bharatiya Jana Sangh candidate in the Lok Sabha election in the Beed constituency. He attended the Rashtriya Swayamsevak Sangh's Shiksha Varga (Training Camp) held in Pune that year. He soon became the Sambhajinagar Mandal Karyavah, looking after half a dozen shakhas of the RSS, and subsequently, the in-charge of its Pune City Students' Cell. Later, he was made a member of the executive committee of the city RSS.The Janata Party by this time had split, and the Bharatiya Janata Party, founded by the leaders the erstwhile Bharatiya Jana Sangh had come into existence. Munde was made President of the Maharashtra unit of the BJP's youth wing, the Bharatiya Janata Yuva Morcha. Recently there was a controversy about his education.

Lok Sabha
Munde served as a member of the 15th Lok Sabha (2009–2014), representing the Beed constituency.
Munde won 2014 Loksabha election from Beed Constituency by margin of 1.4 lacs. He defeated NCP's Suresh Dhas.Subsequently, he was appointed as Minister of Rural Development by Prime minister Narendra Modi.

Death
Munde was involved in a road accident at 6:30 AM on June 3, 2014, while on his way to the Delhi airport. The accident took place at Aurobindo Marg in South Delhi. He was brought to AIIMS by his personal assistant and driver, 10 minutes after the accident. After receiving CPR, he was declared dead at 7:20 AM. The driver of the car has been taken into custody as per reports.