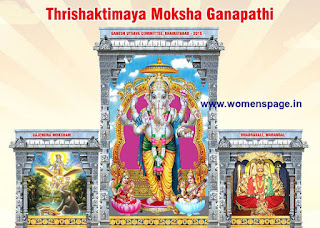 
Ganesha Chaturthi is the Hindu festivalcelebrated in honour of the god Ganesha, The son of Shiva and Parvati, Ganesha has an elephantine countenance with a curved trunk and big ears, and a huge pot-bellied body of a human being.He is the Lord of success and destroyer of evils and obstacles. He is also worshipped as the god of education, knowledge, wisdom and wealth. In fact, Ganesha is one of the five prime Hindu deities(Brahma, Vishnu, Shiva and Durga being the other four) whose idolatry is glorified as thepanchayatana puja,is observed in the Hindu calendar month of Bhaadrapada, starting on the shukla chaturthi (fourth day of the waxing moon period). The date usually falls between August and September. The festival lasts for 10 days, ending on Anant Chaturdashi (fourteenth day of the waxing moon period).

Weeks or even months before Ganesha Chaturthi, artistic clay models of Lord Ganesha are made for sale by specially skilled artisans. They are beautifully decorated and depict Lord Ganesha in vivid poses. The size of these statues may vary from 3/4 of an inch to over 70 feet.
Ganesha Chaturthi starts with the installation of these Ganesha statues in colorfully decorated homes and specially erected temporary structures mandapas (pandals) in every locality. The pandals are erected by the people or a specific society or locality or group by collecting monetary contributions. The pandals are decorated specially for the festival, either by using decorative items like flower garlands, lights, etc. or are theme based decorations, which depict religious themes or current events.

Story of loard Ganesha:
Significance of the loard Ganesha Form:
Ganesha's head symbolizes theAtman or the soul, which is the ultimate supreme reality of human existence, and his human body signifies Maya or the earthly existence of human beings. The elephant head denotes wisdom and its trunk represents Om, the sound symbol of cosmic reality. In his upper right hand Ganesha holds a goad, which helps him propel mankind forward on the eternal path and remove obstacles from the way. The noose in Ganesha's left hand is a gentle implement to capture all difficulties.
The broken tusk that Ganesha holds like a pen in his lower right hand is a symbol of sacrifice, which he broke for writing the Mahabharata. The rosary in his other hand suggests that the pursuit of knowledge should be continuous.
The laddoo (sweet) he holds in his trunk indicates that one must discover the sweetness of the Atman. His fan-like ears convey that he is all ears to our petition. The snake that runs round his waist represents energy in all forms. And he is humble enough to ride the lowest of creatures, a mouse.


The story of the birth of this zoomorphic deity, as depicted in the Shiva Purana, goes like this: Once goddess Parvati, while bathing, created a boy out of the dirt of her body and assigned him the task of guarding the entrance to her bathroom. When Shiva, her husband returned, he was surprised to find a stranger denying him access, and struck off the boy's head in rage. Parvati broke down in utter grief and to soothe her, Shiva sent out his squad (gana) to fetch the head of any sleeping being who was facing the north. The company found a sleeping elephant and brought back its severed head, which was then attached to the body of the boy. Shiva restored its life and made him the leader (pati) of his troops. Hence his name 'Ganapati'. Shiva also bestowed a boon that people would worship him and invoke his name before undertaking any venture.

However, there's another less popular story of his origin, found in the Brahma Vaivarta Purana: Shiva asked Parvati to observe the punyaka vrata for a year to appease Vishnu in order to have a son. When a son was born to her, all the gods and goddesses assembled to rejoice on its birth. Lord Shani, the son of Surya (Sun-God), was also present but he refused to look at the infant. Perturbed at this behaviour, Parvati asked him the reason, and Shani replied that his looking at baby would harm the newborn. However, on Parvati's insistence when Shani eyed the baby, the child's head was severed instantly. All the gods started to bemoan, whereupon Vishnu hurried to the bank of river Pushpabhadra and brought back the head of a young elephant, and joined it to the baby's body, thus reviving it.

Khairatabad Ganesh:
Khairatabad Ganesh new look for this year is Thrishaktimaya Moksha Ganapathi and the height of god is 59 feet as completing 59 years.The expenditure to complete this idol around 60 lack.And the Laddu weight is 5600kgs made from Tapeshwaram.Ganesha is in the standing position with godess Lakshmi and Saraswathi.To the right of main ganesh idol will be a depiction of Gajendra Moksham dispalys with Elephant and crocodile and left side displays the Bhadrakali in sitting position.Nearly 150 works are working for making of the Ganesha.Mostly artists  are from chennai.The idol will be immersed in the hussain sagar lake on sunday,September27th.The governor of Telengana will inaugurate and CM will be attend it.